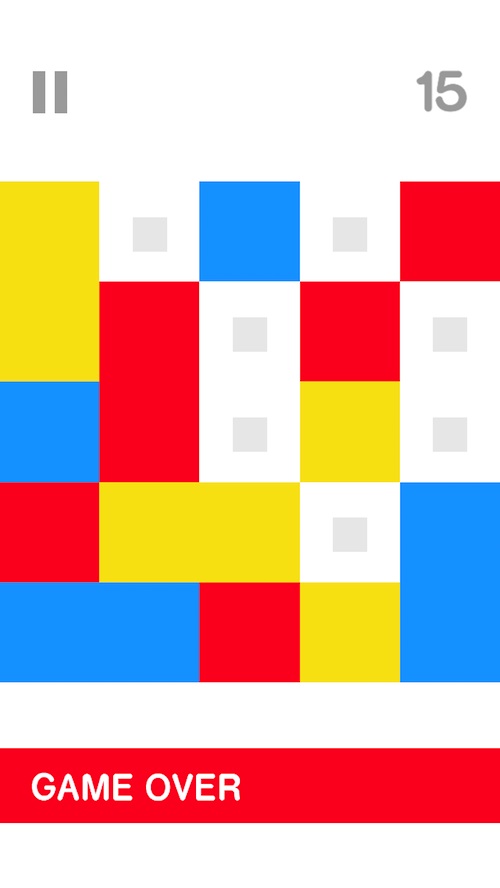 If you are getting tired of casual games in the App Store being too casual, you may be turning into a gamer. Gamers play casual games, too. They just like the ones that are impossible to beat. They enjoy the challenge.

Stickets is one of those casual games that you’ll likely find on a gamer’s iPhone. It looks great, has a simple design, and will make your brain hurt after 10 minutes…

The design of this match-three puzzle game is actually what caught my eye in the App Store in the first place. The background is a nice, solid white and the blocks in the default theme are primary colors.

When it comes to the game’s controls, you’ll be dragging and dropping L-shaped blocks onto a grid. You can’t spin the blocks or flip them around. All you can do is drop them onto the grid. If you try to overlap any portion of the blocks, they will change texture and a subtle chime will sound. 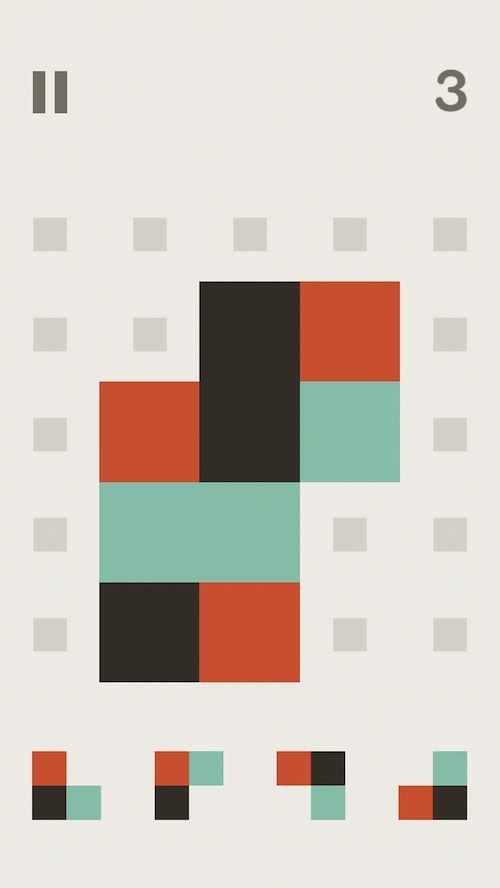 This is a match-three puzzle game that takes things to a whole new level by making it so challenging that you will be tempted to throw your iPhone at your cat. The goal of the game is to place as many blocks on the grid as possible. The grid is a four-by-four square and the blocks are shaped like a stubby L that takes up three spots on the grid.

Each block is divided into three different colors. If you manage to get three of the same color squares next to each other, you can remove that row or column of squares to make room for more blocks.

There are always four blocks at the bottom of the grid for you to choose from. Each block faces a different direction and has the colors in a different order. Touch the block you want to move and drag it to the grid. When you place it, a new block with a different pattern, but the same position, will replace it.

You can also play the game in “Time” mode, which is a fast-paced version of the basic “Space” mode. I can’t tell you how to play Time mode, or the “Puzzle” mode, because this game is so difficult it is nearly impossible to get to 50 points in a single game. I don’t feel bad saying that either, I watched a few real-time gameplay videos on YouTube and, not even the guys at Touch Arcade could reach 50 points.

It is possible to do, but very difficult. In fact, the more I played the game, the more I was able to strategize ways to keep the board clear so that I could earn more points.

One suggestion includes keeping the board as clear as possible at all times. You don’t earn extra points for matching four colors in a row. You only get points for blocks that make it onto the board, so don’t waste space. Clear the matches as soon as possible. Another would be that if you want a block with a specific position to appear with the right color in the right place, it isn’t going to happen. Just try to match the squares with what you have or you’ll end up with nowhere to move.

The “Space” mode of this game is almost relaxing. You are not timed and you don’t run out of blocks. If you run out of room, just start over and try again. The soundtrack is pleasant to listen to, adding to the relaxing vibe you get from playing.

This game is just too hard for me. That statement is going to be the reason why some people will love it. I really enjoyed the challenge, but felt so frustrated whenever I lost. I never even got close to 50 points, which is the number you need to unlock Timed and Puzzle mode. The highest score I managed was 32 points.

Even though this game is great for people that like a serious challenge, I just wish there was an easy mode for those of us who just can’t handle the heat.

Since the game technically fits into the casual category, it is considered pricey. A $2.99 price tag is normally reserved for games that offer a bit more gameplay. However, the difficult challenge of the puzzles makes it a gamer’s paradise. Since it appeals to a more discerning audience, it makes the price irrelevant to those who will enjoy it.

Even though this game is one tough cookie, I recommend it for people who consider themselves gamers. If you spent $20 on the iOS version of XCOM: Enemy Unknown, then you understand the lingo and will enjoy this game. If you are more of a casual gamer who spends more time playing Angry Birds than anything else, you may find this game to be a bit excessive. Download Stickets in the App Store today.