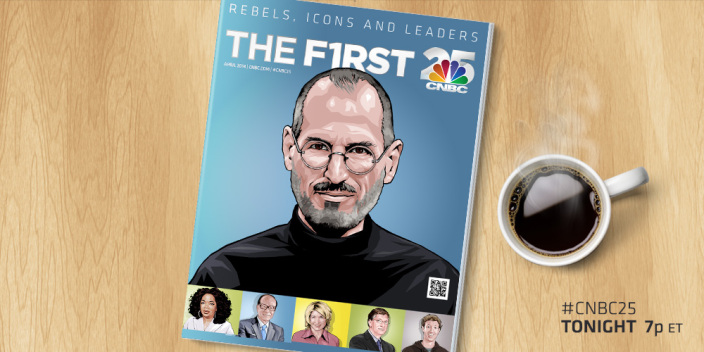 As part of its ongoing 25th anniversary celebration, CNBC put together a list of what it believes were the top 25 most influential people in the last 25 years. Dubbed ‘First 25: Rebels, Icons & Leaders, the list includes the likes of Jeff Bezos and Oprah Winfrey.

For many, it’ll come as no surprise that CNBC ranked Steve Jobs #1 in the list. The outlet said that the co-founder of Apple deserved the top spot because “his vision spurred changes far beyond his industry and put an indelible stamp on the wider culture.”

Here’s an excerpt from CNBC’s paragraph on Jobs:

His creative genius revolutionized not just his industry and its products, but also everything from music and movies to smartphones. He provided a platform for others to create and distribute apps, bringing innovation and change to an even wider sphere. Apple’s co-founder tops our anniversary list of the 25 most transformative leaders, icons and rebels of the past-quarter century. More than any other member of our group of extraordinary entrepreneurs and executives—all outstanding leaders—his vision spurred changes far beyond his industry and put an indelible stamp on the wider culture.

And here is the [Flash] clip that aired on CNBC yesterday:

Jobs, who passed away in 2011 after a battle with pancreatic cancer, has been posthumously honored on several occasions for his achievements including a Grammy Award, a Disney Legends Award, and an induction into the Bay Area Business Hall of Fame.