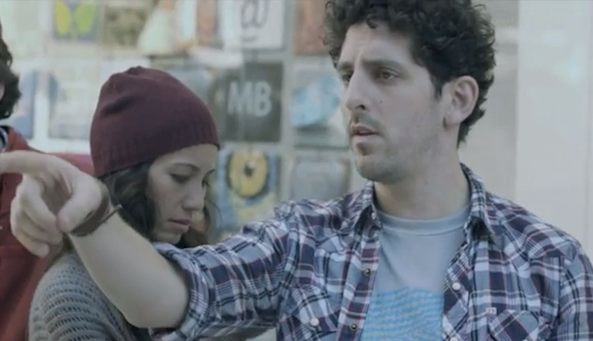 Apple’s second California trial against Samsung over smartphone patents has given us an unprecedented insight into Samsung’s obsession with beating Apple and Apple’s worries over losing the cool factor to Samsung due to the snarky ads that ridiculed the iPhone as an outdated and dull phone.

As you know, Samsung’s campaign headlined under the ‘The Next Big Thing’ tagline went viral in September of 2012, thanks to a particularily scathing ad that ridiculed folks who’d wait in line for an iPhone 5.

The commercials were meant to counter the iPhone 5 “tsunami,” as Samsung execs put it, and have managed to enrage Apple’s marketing boss Phil Schiller so much that he proposed in an email to CEO Tim Cook that the firm fire its longtime ad agency.

According to a highly confidential email exchange between Samsung execs, we now know that the South Korean firm saw Steve Jobs’s death as the “best opportunity to attack the iPhone” and tarnish the Apple brand…

The emails were presented as evidence in the trial and obtained by AppleInsider.

As a reminder, Apple on October 4, 2011, announced the iPhone 4s and Steve Jobs passed away the following day.

Then vice president of sales operations and head of national sales for Samsung Telecommunications America, Michael Pennington, immediately issued an internal email to Todd Pendleton, Samsung’s chief marketing officer, to frame the unfortunate event as an opportunity to take the iPhone 4s head on.

“Sorry to continue to push this issue, but I have seen this far too long and I know this is our best opportunity to attack iPhone,” Pennington wrote. “If there is no consensus on the approach I initially proposed, I will stop pushing, but I would like to better understand our strategy so I can align with that.”

The point here is the there is an unintended benefit for Apple, since the external messages by third parties are all highlighting and/or supporting the consumer perception that Apple products are superior, since Jobs’ was such a visionary and perfectionist.

What consumer wouldn’t feel great about purchasing a device developed by such a person?

He then goes on to complain how Jobs’s passing has led to “a huge wave of press coverage of Apple’s and iPhone’s superiority, all created by the, passionate, tireless, perfectionist” CEO.

To this, Pendleton replied that his team would unleash the holiday ad blitz “and go head to head with iPhone 4s.”

We are working on a very aggressive strategy touting our advantages in hardware and software. In the process we will demystify the perceived Apple advantage (ecosystem/services) by showing how consumers can easily switch to Android and have more personalization/more choice by being part of the Samsung ecosystem.

Pennington also suggested that Samsung should “use Google to attack Apple” in a marking campaign as a way to “avoid attacking Apple due to their status as a large customer.”

If it continues to be Samsung’s position to avoid attacking Apple due to their status as a large customer, can we go to Google and ask them to launch a campaign against Apple, based on the many better Android options available in the market for the fourth quarter of 2011?

Here’s a screenshot of the email exchange. 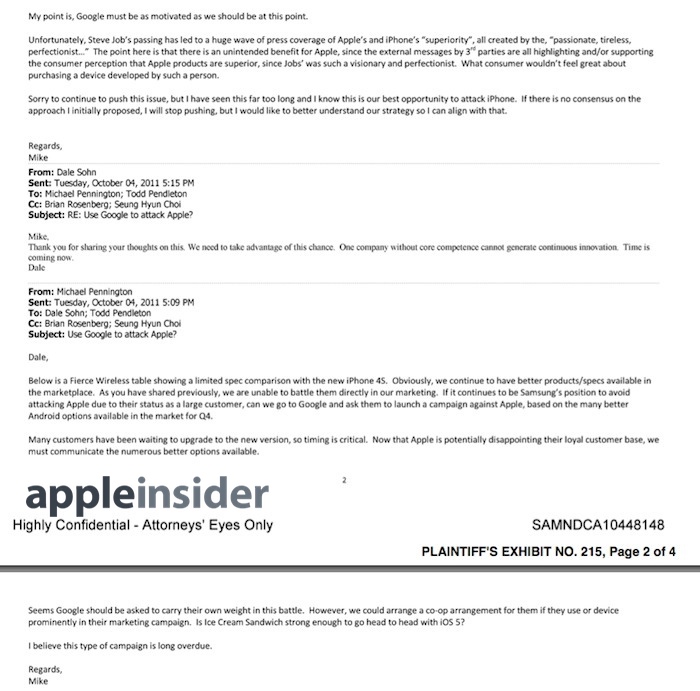 After losing the first patent trial which resulted in nearly a billion dollar in damages to Apple, Samsung’s legal strategy has taken a U-turn. The company is now attempting to shield itself by arguing that some of the allegedly infringing features its devices use have been developed by Google.

Samsung is also arguing it’s been successful at beating Apple because it had better marketing, not due to patents or any specific feature.