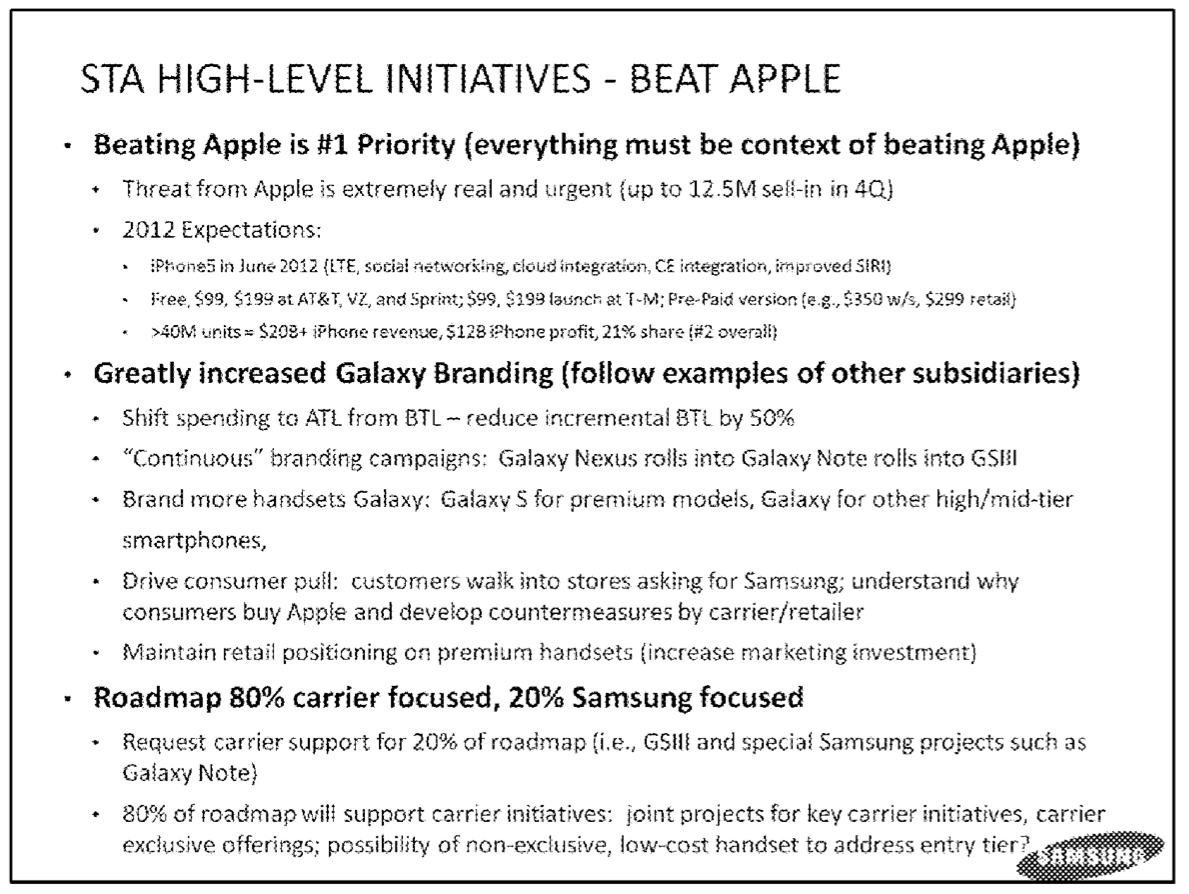 A treasure trove of internal documents have been leaking out of Apple’s second California trial against the Galaxy maker Samsung.

Not only has the confidential material given us an unprecedented look into the firm’s development process for the iPhone and Steve Jobs’s wish list for the Apple TV (apps, something called ‘magic wand’ and more), it’s also provided us with valuable insight into Apple’s marketing survey explaining why the iPhone’s growth has been slowing and another internal research highlighting the most often requested features by early iPhone 5 adopters.

And now, a new set of internal Samsung documents proves the South Korean conglomerate has been pretty much obsessed with crushing Apple in the marketplace, so much so that it devoted all of its energies throughout 2012 to one goal: beating Apple.

The presentation entitled ‘2011 Summary & Lessons Learned / 2012 Business Forecast’ made it clear to Samsung’s managers that beating Apple was their #1 priority for 2012. “Everything must be in context of beating Apple,” reads the memo.

The document offers an insight into Samsung’s thought process, marketing tactics and how it went about containing the iPhone threat by pouring billions into advertising, playing ball with carriers and carpet-bombing the market with countless variants of devices with different screen sizes and price points…

“Threat from Apple is extremely real and urgent,” note the slides.

The confidential docs reveal Samsung expected the iPhone 5 to come out in the summer of 2012, featuring “LTE, social networking, cloud integration, CE integration, improved SIRI.” Instead, Apple released the handset on September 21, 2012 in the United States and in a few key markets globally.

In order to curb the iPhone threat, Samsung proposed greatly increasing Galaxy brand activities by doubling down on advertising, increasing marketing investment to “maintain retail positioning on premium handsets,” branding more of its handsets Galaxy and pulling consumers away from Apple Stores. 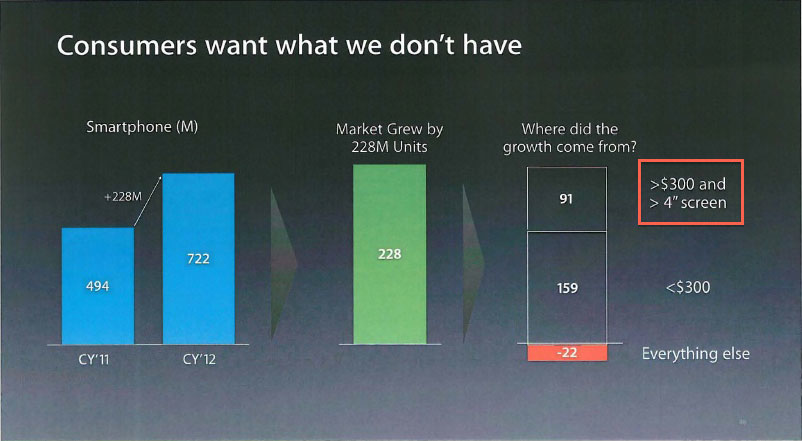 “Customers walk into stores asking for Samsung,” reads the slide. “Understand why consumers buy Apple and develop countermeasures by carrier/retailer.”

Indeed, Samsung did create Galaxy talking points to consistently criticize the iPhone’s lack of a bigger screen and its other perceived weaknesses. Samsung’s arguments were communicated to the world through the firm’s ‘It Doesn’t Take a Genius’ and ‘The Next Big Thing’ campaigns and were given to sales people to sway consumers into getting a Samsung.

I’m not surprised Samsung was obsessed with Apple. This being a cut-throat business, it certainly pays to keep tabs on what the competition is doing. The iPhone is the most popular smartphone in the world and Samsung was right to focus on the device, though its marketing and sales tactics may have been cheap and unfair.

Besides, Koreans are generally regarded as methodically persistent and Samsung is perhaps the most ambitious conglomerate in the world. Being #2 just doesn’t cut it for them: the firm wants to be first and own every market it participates in.

By the way, check out how much cleaner Apple’s internal presentations are (left) compared to Samsung’s (right).

Samsung also worked closely with carriers to deflect the iPhone threat, requesting carrier support for about 20 percent of its roadmap, with the remaining 80 percent of roadmap purposefully dedicated to supporting carrier initiatives.

In other words, Samsung made sure to play ball with carriers by creating devices to their liking (“joint projects for key carrier initiatives”, “low cost handsets to address entry tier”, “carrier exclusive offerings” and so forth).

This must have been music to carriers’ ears. 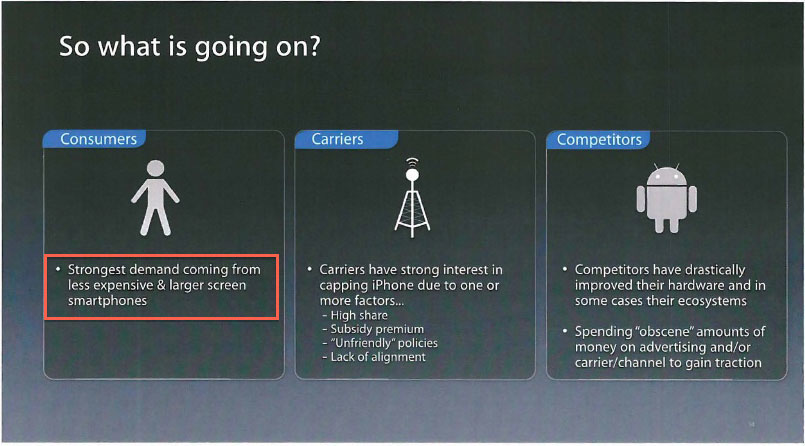 Apple is famously difficult to work with and is the only handset maker that can say ‘no’ to carriers and own the entire user experience.

Both Apple’s internal research and sales projections (depicted above) reveal the company was aware it didn’t have what early iPhone 5 adopters wanted most – that is, a sub-$300 iPhone with a larger screen. The rumor-mill is adamant that the firm will release two larger-screened iPhones this year to accelerate growth.