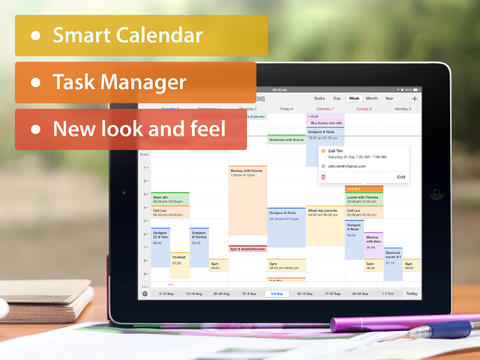 Ukrainian developer Readdle has updated its free and paid Calendar apps for iOS with a refreshed user interface on the iPad sporting better layout and improved navigation. On the iPhone, the new Calendars 5.4 lets you set customer reminders and both editions include a pair of maintenance fixes and other improvements.

Now available to download in the App Store, both the free Calendars app and the $2.99 premium Calendars have been updated with the aforementioned features…

If you love Readdle apps, you’ll want to download Printer Pro for iPhone which went free yesterday and immediately became #1 free download in 15 countries, according to Readdle on Twitter.

Best thing you download the app right now as it’s set to go back up to its normal asking price of $4.99 tomorrow.

The team also noted that PDF Expert’s iOS 7 style redesign is being developed as we speak. In addition to iOS 7 styling, the upcoming PDF Expert 5 will be a universal app with new features.

Download the free Calendars 5 for iOS in the App Store.

The premium edition of Calendars 5 will set you back $2.99.

Both are universal and run natively on any iPhone, iPod touch or iPad compatible with iOS 6.0 or later.