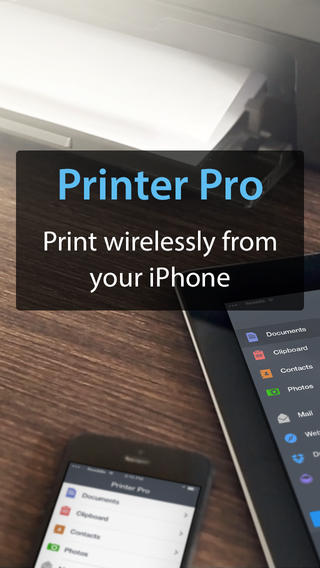 AirPrint, Apple’s wireless printing technology is great except when it is not. The problem with AirPrint: limited vendor support. Unless you own a printer that works with AirPrint, you’re out of luck.

But things don’t have to be this way and thanks to a myriad of printer-related apps on the App Store, you can easily send images, documents and other content in select iOS apps to non-AirPrint printers.

One of the best printer apps on the App Store, Printer Pro for iPhone by Ukrainian developer Readdle has gone free for the next 24 hours. This nicely done and powerful productivity app normally retails for five bucks a pop so now’s a good time to grab Printer Pro for iPhone free of charge if you haven’t already…

So not only can you wirelessly print web pages, iWork documents and files from other applications, the app lets you send email attachments, photos, clipboard content, contacts and Documents on Dropbox and Google Drive to a Wi-Fi-connected printer.

And should you need to print more types of documents with better quality, Readdle recommends downloading a free helper application for your Mac.

So how does this work?

Pretty straightforward: the app appears as an ‘Open In,’ allowing you to send documents to Wi-Fi printers from any third-party app that supports the ‘Open In’ feature via the standard iOS Share sheet.

Printing a web page in Safari is a simple matter of changing ‘http’ to ‘phttp’ in the address bar. Hit Go and the webpage will open in Printer Pro.

Folks who own both Readdle’s Documents 5 and Printer Pro app will notice a new printing option in Documents 5 that sends any picture or document to a connected printer, without leaving the app. Documents 5 integrates this way with Readdle’s other apps, including PDF Expert 5, Scanner Pro and others.

Download Printer Pro for iPhone from the App Store, free today only.

The app requires an iPhone or iPod touch running iOS 6.0 or later.