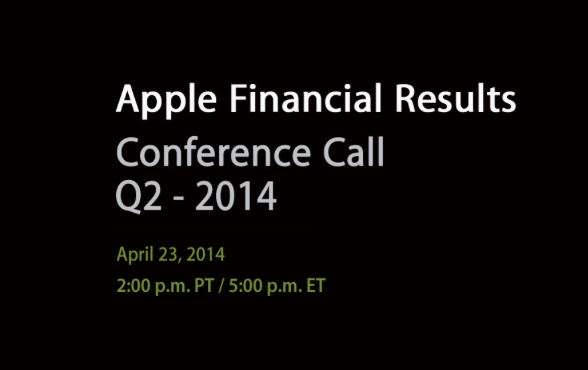 Folks wondering how Apple did during its quiet second quarter will have their answer in just a few short weeks. The Cupertino company has updated its Investor Relations page to note that it will be releasing its financial results for Q2 2014 on April 23rd.

There were no new products announced during the 3-month period, but Apple did make some changes to its device lineup. In March, the company launched a new 8GB version of its iPhone 5c in certain countries, and reintroduced its 4th generation iPad…

Here’s Apple’s guidance for the quarter:

Apple is providing the following guidance for its fiscal 2014 second quarter:

Of course, Apple never offers guidance regarding smartphone or tablet sales, but it’s safe to assume they are going to be on the lower side. Q2 and 3 are typically slow for the company, as they sit between the holidays and anticipated product refreshes in the fall.

At any rate, the conference call is slated to begin on Wednesday, April 23 at 2pm PST. And as usual we will be providing full coverage of the call here on iDB, posting financial results and any other announcements or notable highlights. So make sure to tune in!