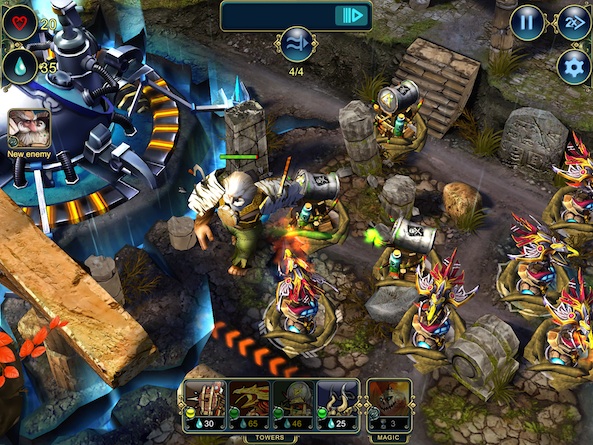 I am a fan of tower defense games. They can be surprisingly exciting if the game is made well. Of course, everyone knows I’m also a fan of collectable card games (CCG). I couldn’t call myself a true gamer if I didn’t have a few Magic cards in my possession.

Defenders mixes both the tower defense and CCG genre into one heroic adventure. Beat bosses, loot cards, and build the most powerful weapons this fantasy world has ever seen…

This iOS title is based on the desktop game of the same name. The creators managed to port full-scale PC level graphics to the mobile environment. So, you can imagine how slick this game looks.

It starts with a prologue that resembles a comic strip. Players learn about the Touched, Prime, and Dokht technologies. The overall theme of the game is somewhat interlaced with Steampunk in that the story fuses fantasy with technology. For Dungeons & Dragons fans, it is a lot like Eberron.

The real work begins on the battlefront. Players must build towers in designated areas to destroy waves of enemies. Take down kobolds, satyrs, harpies, trolls, and bosses that defy description.

After successfully completing a mission, players receive a special loot card that unlocks a new tower or spell. Between battles, you can change out cards in order to build the ideal hand for your strategy.

The artwork on the card is perfectly suited for fans of CCGs. I almost wish I could print these things out to play in real life. The graphics in the game include detailed animations of each tower’s effects. The realistic sounds like arrow shots, rainfall, and explosions, draw you into the game more effectively. The story driven plot development gives players a reason to progress from one mission to another. 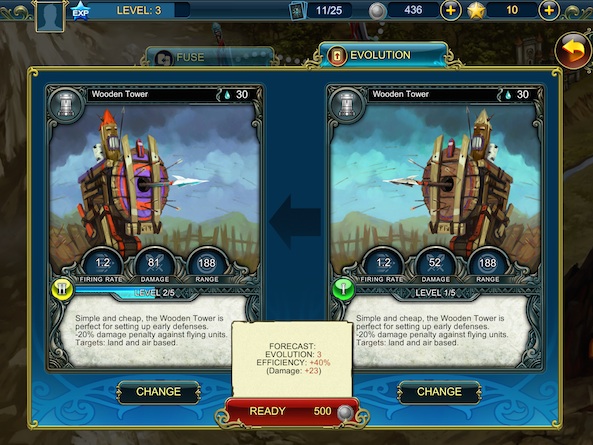 Players set out on a battle across the Primezone in hopes of eliminating the Touched creatures who have infected the world. Using every weapon in your arsenal, protect Prime Anomalies and destroy the evil that walks the planet.

Each level features a new mission. Many will introduce new enemies. The goal is always the same. Kill everything that moves before it reaches your power source.

The battlefield consists of a series of designated spots where players can place their towers. Drag a tower from your arsenal onto the field to see where you are allowed to place it. Highlighted squares will appear. Use well planned strategies to place your towers. For example, a Fire Tower does ranged damage, so placing it on a corner where it can follow enemies and cause more injury would be the ideal strategy.

The basic rules of tower defense apply in this game. Players try to defeat waves of enemies before they reach the end point. In this case, it is a Prime Anomaly. If an enemy reaches the Prime Anomaly, he will attack it, reducing the player’s health. If the end point is destroyed, the player dies and the mission is incomplete.

At the end of each completed mission, players will earn one or more tower cards. These cards can be used in future missions to help in the attack. For example, the Slingshot is ideal for attacking airborne creatures, like harpies. Equip this card when you go up against flying enemies.

Here is where the interesting CCG aspect comes into play. Players can evolve or fuse their cards into new and stronger ones. Normally, in a tower defense game, the only thing you have to do in order to upgrade a weapon is pay a higher energy cost. In this game, you must unlock the ability to upgrade by evolving two of the same cards together. This unlocks the ability to upgrade a tower. Evolve it again to unlock the next upgrade. Then, when you go into battle, you can upgrade that tower, but you still have to pay additional energy points.

You can also fuse cards to create more powerful ones. For example, you can combine a Slowing Tower with a Stone Tower to increase the card’s efficiency, damage, range, and slowing effect. Experiment with different cards to see what you come up with.

In the game’s store, you can purchase new cards, like a Rare Booster, an Artifacts Set, or a Mysterious Mirror. These items can be purchased with coins and stars that players earn in the game. Of course, you can also add in-game currency with an in-app purchase. But, who would want to do that in a game they’ve already paid to download? 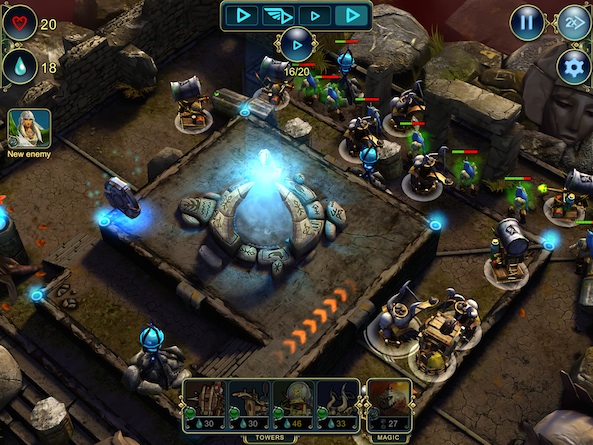 I really enjoyed the mixed genre aspect of this game. Tower defense games can be loads of fun, but they can also get a little repetitive after a while. Adding the CCG element gives you a reason to forge ahead. Collecting more cards helps unlock and upgrade your arsenal.

At the hefty price of $4.99, I am sorely disappointed to see that this game offers in-app purchases. I can attest to the fact that the purchases only serve to speed up a games progress artificially. You won’t ever feel the need to buy something that you couldn’t earn by simply playing the game.

Defenders costs $4.99. This is a detail-rich, full-scale game with strong graphics and unique play mechanics. The price is high, but reasonable for the quality of gaming it offers. The replay value is decent as there are randomly generated missions, which can change with each new battle. Plus, if you don’t get three stars the first time around, you can go back later and play a level with better weapons.

This is definitely a fun tower defense title. The mash-up with CCG adds a little something extra to make it more interesting than the average game in the genre. The price is steep, so I would recommend it to fans of tower defense, but advise caution for CCG fans as the mechanics are designed for the former. This game is available on the iPhone, iPad, and iPod touch. Download it in the App Store today.

The game’s developer was kind enough to give us a free copy of the game for one of our lucky readers. Have at it!