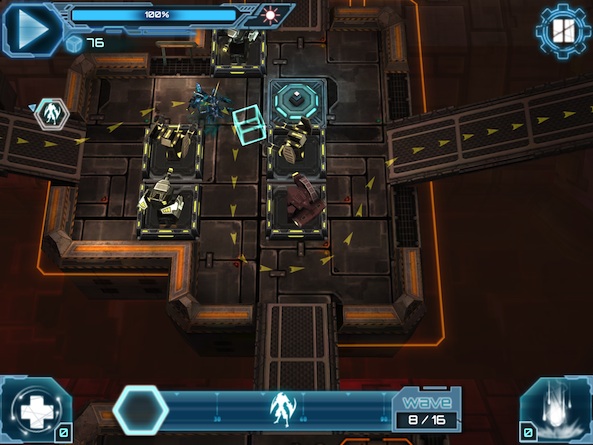 The tower defense genre is a tried and true gaming category in the App Store that has had some gems and flops. What makes a TD game stand out in the sea of others like it is unique design and interesting gameplay.

The game’s theme is sci-fi-alien-invasion featuring bug-like bio beings with weapons of great power. Players are tasked with defending a space station and protecting its core. If the core is destroyed, the space station goes down.

As is typical with TD games, turrets cost some kind of currency. In this game, energy cubes are used to pay for new weapons. Weapons are placed in specified locations by tapping the available spot and then tapping the weapon you want to build. Then, tap the weapon again to build it.

You can zoom in and out of the level, but only slightly. To see all available paths, you’ll need to drag your finger on the screen to move around. The levels are fairly expansive. They get bigger as you go along, too.

Each level includes three different modes. Campaign mode, which is the base of the game, must be unlocked before you can play Hell mode. Hell mode is more difficult, but still possible to beat with the right strategy. If you are able to beat it, you can unlock Endless mode, which gives you access to all available weapons, but requires you to fight to the death. You don’t start out the harder levels with any additional energy cubes. 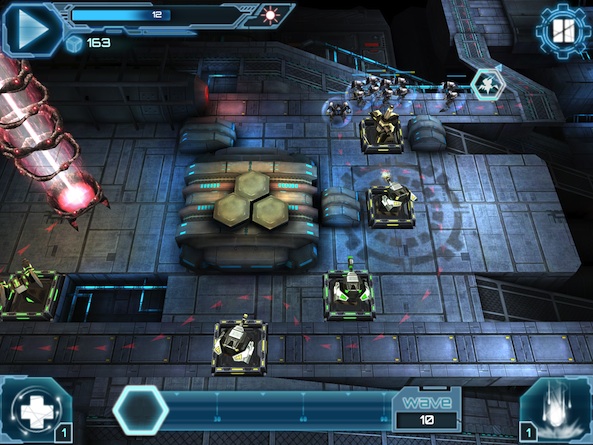 The game starts by giving you a couple of quick pointers on how to build turrets and best strategies for different types of enemies. Then, you’ll be on your own, defending your tower to the best of your abilities.

To place a tower, tap the designated build location. These spots will be identified with a glow around them. After tapping the location, the weapon options will appear. If you can afford the weapon, it will be highlighted in blue. If you don’t have enough energy cubes, it will be red.

After placing the turret, it will be built immediately. More expensive weapons need a bit more time, but not much. If you decide to build a block instead of a weapon, you can add a weapon on top later. However, if the enemy destroys a weapon or block, nothing can be built in its rubble.

As enemy combatants are killed, players earn energy. When an entire wave has been defeated, a transparent cube will appear on the ground. This is an extra bonus for destroying the wave. You must manually collect the cubes when they drop or you will lose them after about 30 seconds.

Cards can either be equipped individually or combined to create an even more powerful bonus. For example, I had two upgrade cards that lowered the cost of certain weapons, which I hadn’t even unlocked yet. I combined them in the “Factory” section to create a core shield, which increased the core’s health by twice as much.

You can also use crystals to see the enemy’s plans. By spending 20 crystals, you can activate the “Silver Eye,” which displays the best route for the stage, making it much easier for you to push the enemy toward your path of destruction.

The biggest complaint I have with this game is that players are offered in-app purchases for additional crystals. Personally, I hate paying for a game that also offers in-app purchases. However, this is the way of the world now and more games are following the same model. Defense Technica does offer in-app purchases, but you can still play the game without ever needing to spend more money.

While there may seem like times when you can’t beat a level, it is not because you need more powerful weapons, it is because you need a better strategy. I got stuck on level four and thought it was because my weapons were not powerful enough. After replaying five times, I completely changed my strategy and placed my turrets in an entirely different location and beat the level with no problem. No upgrade necessary. 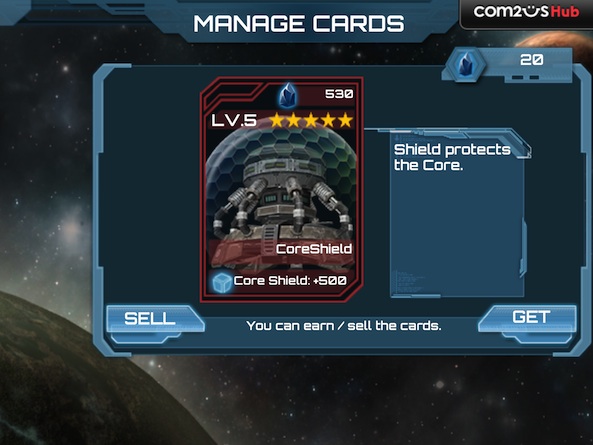 This game offers a very challenging level of play. Most TD games can practically be played on autopilot. Place a couple of turrets, earn some money, place some more turrets, and upgrade weapons. Then, hit the fast forward button until you’ve destroyed all waves of enemies. This game requires you to have a good strategy. You don’t earn a lot of energy cubes, so you must place turrets in ideal locations and use your earnings wisely.

I like that each level offers three different modes. It gives the game a very high replay value, especially Endless mode, which produces a lot of crystals.

While playing on my iPad was seamless, I had a difficult time trying to play this game on my iPhone. I couldn’t even place my first turret when I originally downloaded it. I thought there was a glitch. After speaking with the developer, who was very helpful, it turns out that I was just tapping the wrong spot on the screen. The game’s graphics are so tiny and detailed on the iPhone’s screen that it makes it hard to tell where to tap in order to build turrets fast enough.

The $2.99 price tag is completely reasonable and comparative with other tower defense games. However, because you are presented with in-app purchase options, there is a chance you will end up spending more than that. While I don’t like this new game mechanic of requiring a download cost and then offering more payment options, I know it is the way App Store gaming is headed. In this game, the in-app purchases only make it possible for you to get something immediately that you would otherwise earn if you worked for it. So, you are not getting ripped off if you just play the game.

If you like tower defense games, this one offers a significant challenge that makes it worth checking out. There are plenty of different ways to beat the enemy and you can even use your Silver Eye to find out the best possible route to win the game. Each level features three different modes, giving it a high replay value. Defense Technica is available in the App Store today for $2.99.