Windows giant Microsoft is said to be bringing its note-taking app, OneNote, to the Mac later this month. The company has companion OneNote apps for the iPhone and iPad in the App Store, available free of charge. On the desktop side of things, however, the app’s been exclusive to Windows.

The Verge is reporting that Microsoft, for the first time, will be making the desktop app free to both Mac and Windows users in March, unbundling it fully from the cost of Office.

The Redmond giant originally released OneNote more than a decade ago…

That’s an interesting change in Microsoft’s strategy, one possibly threatening makers of popular productivity and note-taking software such as Evernote, reports The Verge:

We understand that Microsoft will release the OneNote for Mac app for free, and the company is also planning to make the Windows desktop version available at no extra cost. This marks a significant change in the way Microsoft manages OneNote, unbundling it fully from the cost of Office.

We’re told part of this free approach is targeted at competitors like Evernote, but Microsoft is also adding additional features to entice people away from the competition.

Also on the way: a new clipper feature that lets users “clip parts of webpages directly into a OneNote”. There’re going to be clipper browser extensions for Google’s Chrome, Microsoft’s own Internet Explorer and Mozilla’s Firefox (what about Safari?) as well. 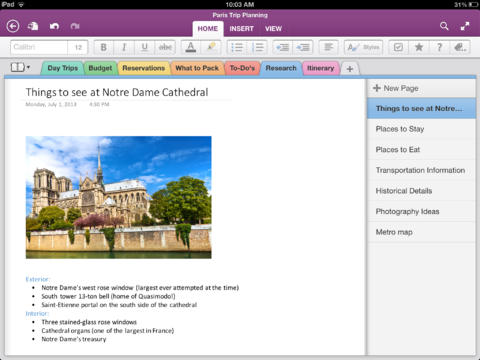 “The feature is very similar to Evernote’s own web clipper, and we understand Microsoft will also allow OneNote users to email notes to its service to be included in a notebook,” author Tom Warren wrote.

Yesterday, a Microsoft executive confirmed that a brand new version of its full-blown Office suite is coming to the Mac later this year. Existing Office 365 subscribers will be able to upgrade to the new version at no additional cost.

You can download OneNote for iPhone free in the App Store.

The iPad edition is a separate 267MB download from the App Store.

While you’re at it, Microsoft, how about consolidating the iPhone and iPad edition under a single universal binary?