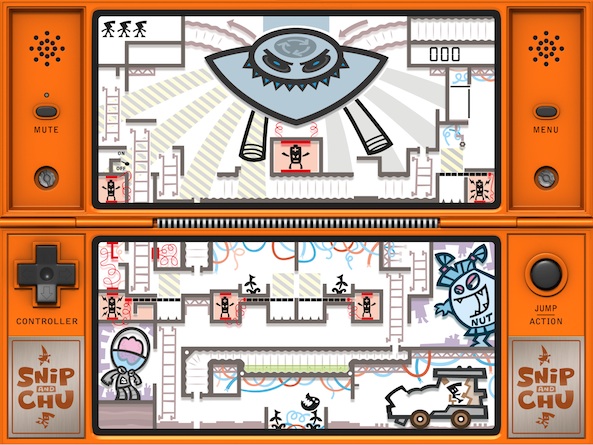 In the 1980s, handheld electronic games were all the rage. They ranged from clamshell style devices that were later used for Nintendo’s DS, to mini games that you could play on a watch. They featured an LCD screen with pre-set custom designs and a visual output similar to digital watch displays.

Just like old school handheld electronic devices, this game features a screen with pre-set movements for your character. Additionally, obstacles and enemies must stick to their preprogrammed environment. The background screen remains the same, as if it were a painted cell overlay on the screen. The black, electronic figures move around under the cell overlay.

The iPad screen includes the game screen, plus a faux clamshell case that looks a lot like Nintendo’s multi screen Game & Watch devices. Two virtual speakers are placed on either side of the screen in the top of the shell, along with a mute button and menu screen.

Players control Chu by using a virtual D-pad on the left side of the screen for left, right, up, and, down. The jump/action button on the right side is for jumping up to wires or activating the on/off switch to slow down the “RecyKiller’s” arm. 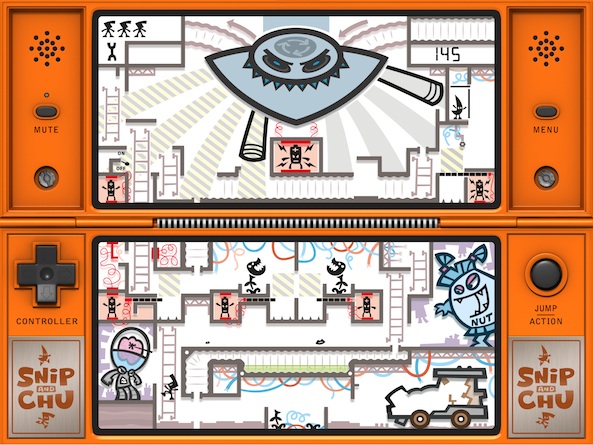 The game is just like old school handheld electronic games. Players have to move Chu around on the screen, collect items while avoiding attacks. The little digital man blinks on and off with every step. Move one space at a time by using the D-pad. Jump up to reach “Spanners” and wires. Use the same button to grab bonus items and flick a switch on.

Players first learn about Snip and Chu, who are two super heroes, in a comic strip at the beginning of the game. Snip, the toenail, was captured by the evil inhabitants of the Wasteworld. Chu, the piece of bubble gum, must save his partner by collecting Spanners that unlock Snip’s prison.

You must replay one level three times to get all three Spanners. After getting the third spanner and making it to Snip, he will be rescued. Then, the game starts again, only harder.

On the first level, platforms remain stationary and there are only a few obstacles to get in the way. For example, a big-brained monster will shoot a laser beam at you while you climb a ladder and a snacking lady nut bag will blow deadly kisses your way.

On the second level, the platforms will open and close, making it difficult for you to get around without risk of falling into a pit of spikes.

On the third level, the RecyKiller throws UnicyKillers that will kill you if you are in the wrong place at the wrong time and don’t jump out of the way fast enough.

Each level gets more and more difficult with new traps and obstacles to get you. However, the screen remains the same. Jeffluent and Patrasha never move from their spots and the RecyKiller keeps rotating his vacuum arms in the same, rhythmic fashion.

Don’t be tricked by the simplicity of this game. It is surprisingly challenging at first. It doesn’t take long to familiarize yourself with the rhythm of the game, but every new level offers a new obstacle that you must get to know before successfully saving Snip. 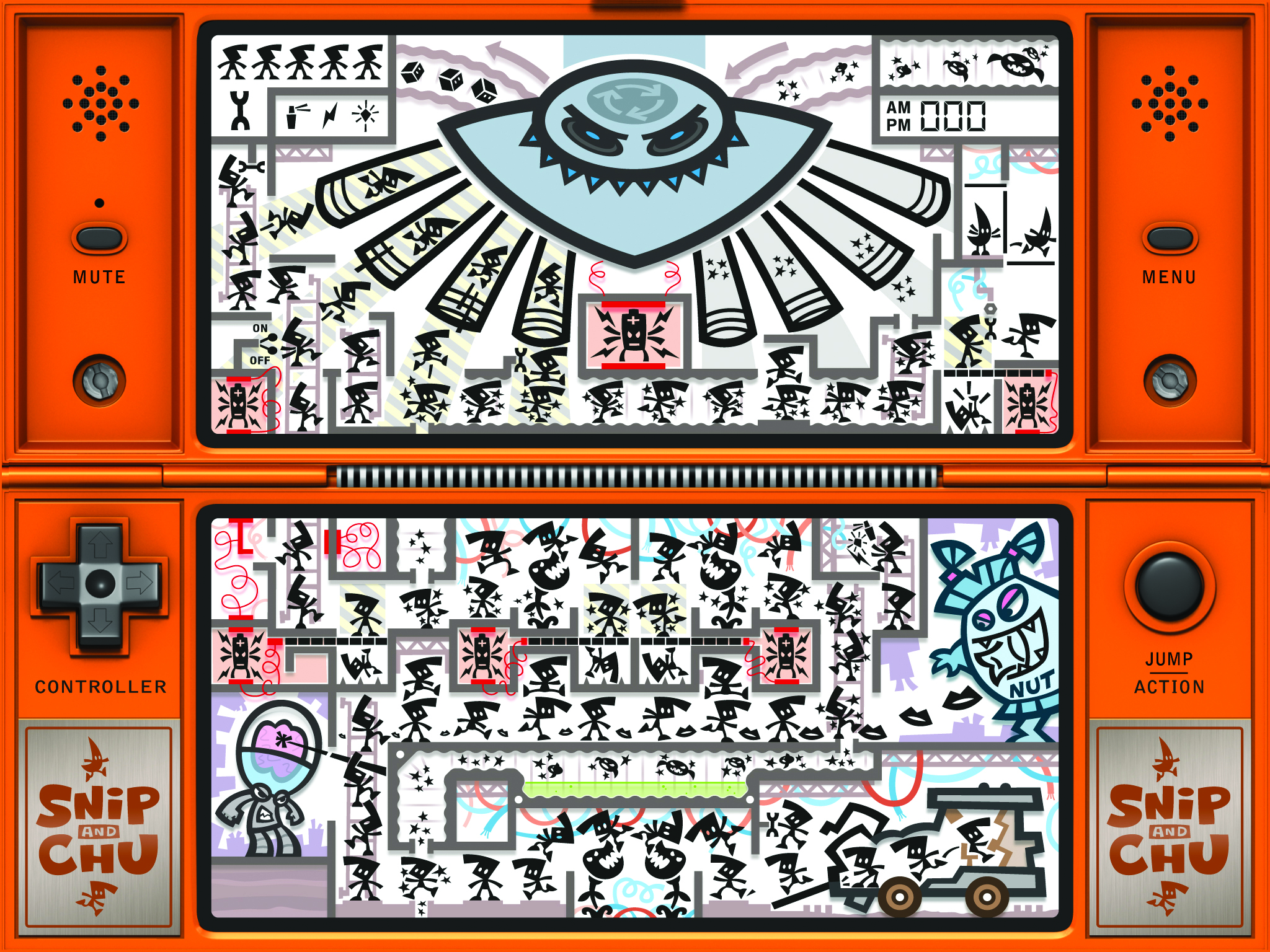 This game is exactly like the handheld electronic games I played as a kid. The blinking digital characters, the repetitive structure, and the increasing difficulty is a total throwback to games from 30 years ago. At the beginning of each new game, the entire screen is filled with a blinking display of every single movement for a quick second, just like those old school games used to have.

My only complaint is not the game’s fault, but reality’s fault. The flat screen makes it impossible for you to “feel” the D-pad and you might accidentally tap the wrong direction, or miss it entirely. It would be awesome if this game were MFi controller compatible.

Snip & Chu costs $0.99. There is also a free 100-page comic book that you can download to find out the story behind Wasteworld and the dynamic duo that protects it. The game is definitely worth the sticker price.

Fans of old school handheld electronics will really get a kick out of this title. It harkens back to the days of Game & Watch games that were so popular in the 1980s. If you know what I am talking about, you will know what this game is about. Because of its simplicity, it may not appeal to gamers under the age of 30. The kids these days and their advanced graphics games. In my day… nevermind. Download it in the App Store today.

The same guys that brought Snip and Chu to the digital age made a similar game called Game of Watchcraft with the same type of mechanics, but it is based in fantasy instead of science fiction.

Are you a fan of Game & Watch games? What do you think of this retro title?