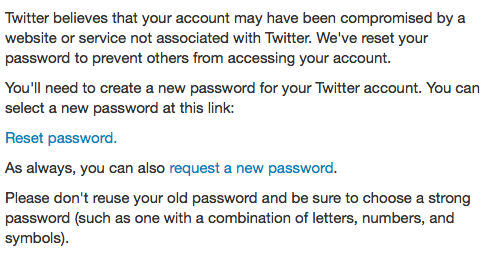 Folks who received an email from Twitter tonight letting them know that their password has been reset are not alone. Thousands of users have come forward over the last 6 hours claiming that Twitter has force-reset their passwords, and requested that they create new ones.

The good news is that it doesn’t sound like the social network was hacked, or overrun with nefarious bots. A spokesperson for the company has confirmed to tech site Recode that a ‘system error’ caused the mass reset of user passwords, and the problem should be fixed now…

Here’s the report from Recode:

“The problem does not appear to be the result of a security breach. According to a Twitter spokesman, the mass reset was accidentally triggered by the company itself.

“We unintentionally sent some password reset notices tonight due to a system error,” a Twitter spokesman told Re/code. “We apologize to the affected users for the inconvenience.”

Twitter says the total number of people affected by tonight’s glitch is less than 1% of its user base, but a quick search on their website shows that a number of folks were forced to create new passwords—including our own Sebastien. The initial fear was the company had been hacked.

This doesn’t appear to be the case though, and therefore the micro-blogging service can breathe a sigh of relief tonight. People these days are more concerned for their online security than ever, and understandably so. We’ve seen over 20 high-profile hackings in the last 6 months.