It seems like we’ve started to hit the point in the jailbreak cycle where developers are starting to pull out the big guns. For instance, we had IntelliScreenX 7 released last night, Sentry teased a work-in-progress Auxo 2, and today, we’re bringing you the first hands-on review of the highly anticipated Vertex—a new jailbreak release that brings Bill Labus’ popular Mission Control concept to reality.

I’ve spent some considerable hands-on time with Vertex—putting it through its paces on my daily driver, bugging Timon Olsthoorn, its humble 16 year-old project manager from the Netherlands—and I have to say, I really like this tweak.

Timon, of course, is just one half of the team that responsible for taking Labus’ concept and making it into something tangible. Memphis Tennessee native Ian Burns puts his stamp on the Vertex project by serving as the tweak’s lead engineer. As you’ll see from our hands-on video walkthrough that follows, Ian is pretty good at what he does.

After installing Vertex, you’ll need to head over to the stock Settings app to find the tweak’s preferences, and toggle the kill-switch at the top of the screen. You’ll then be able to invoke the app switcher like you normally do, which will reveal the new Mission Control-inspired Vertex interface. 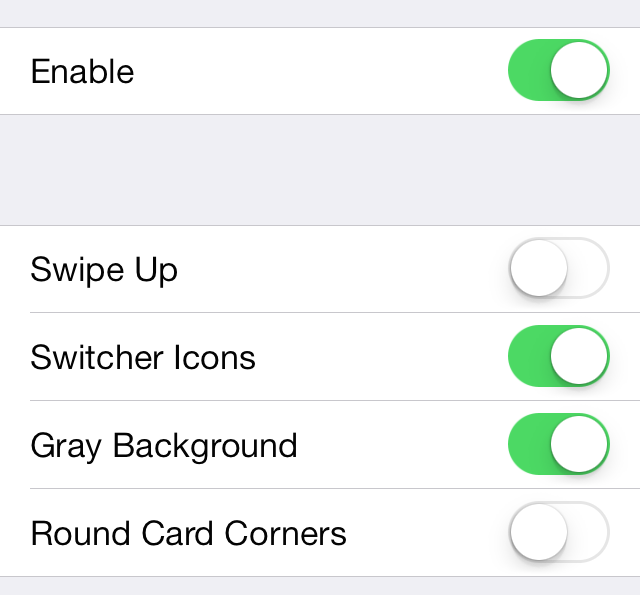 Vertex is essentially a combination of Control Center and the app switcher. It combines those two prominent iOS features into a single interface that’s accessible from a single gesture. Dare I say it arguably simplifies iOS to some degree. 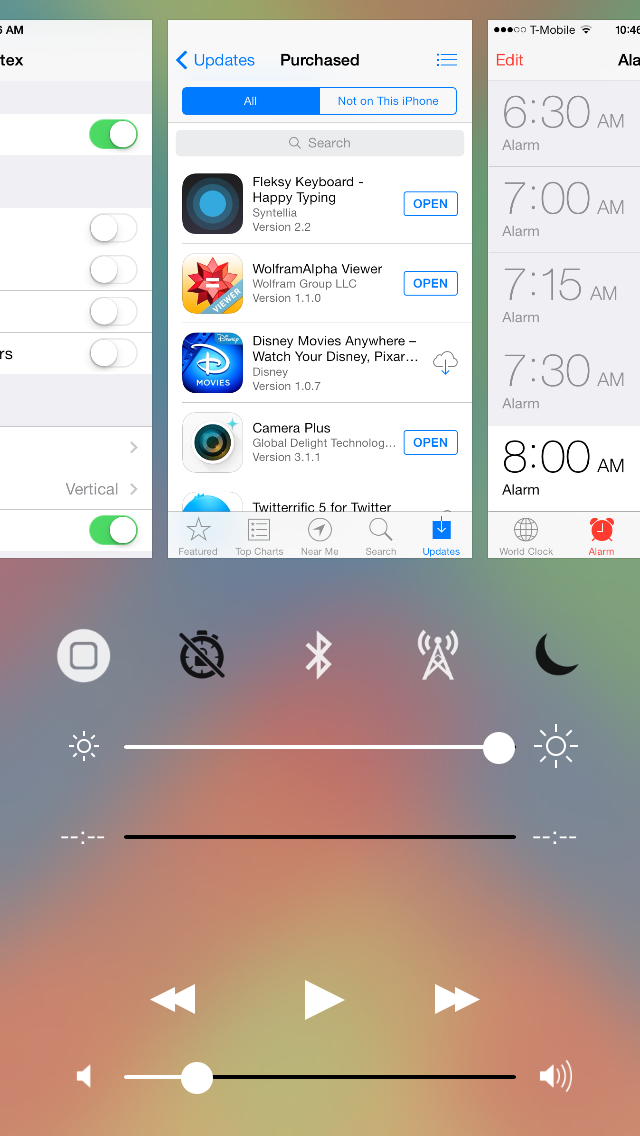 Some may make the argument that Vertex slows you down, because you can’t open Control Center without opening the full-blown app switcher interface as well. This is largely incorrect, as you can still invoke Control Center with a slide up gesture independently of the app switcher, if you keep the Swipe Up toggle in its preferences disabled.

But the Swipe Up toggle is mighty appealing, because it lets you invoke the Vertex interface using a swipe up from the bottom of the screen. Obviously, this means that Control Center is no longer accessible independently, but that’s a concession that you’ll have to make if you want the Zephyr-like swipe-up gesture enabled. 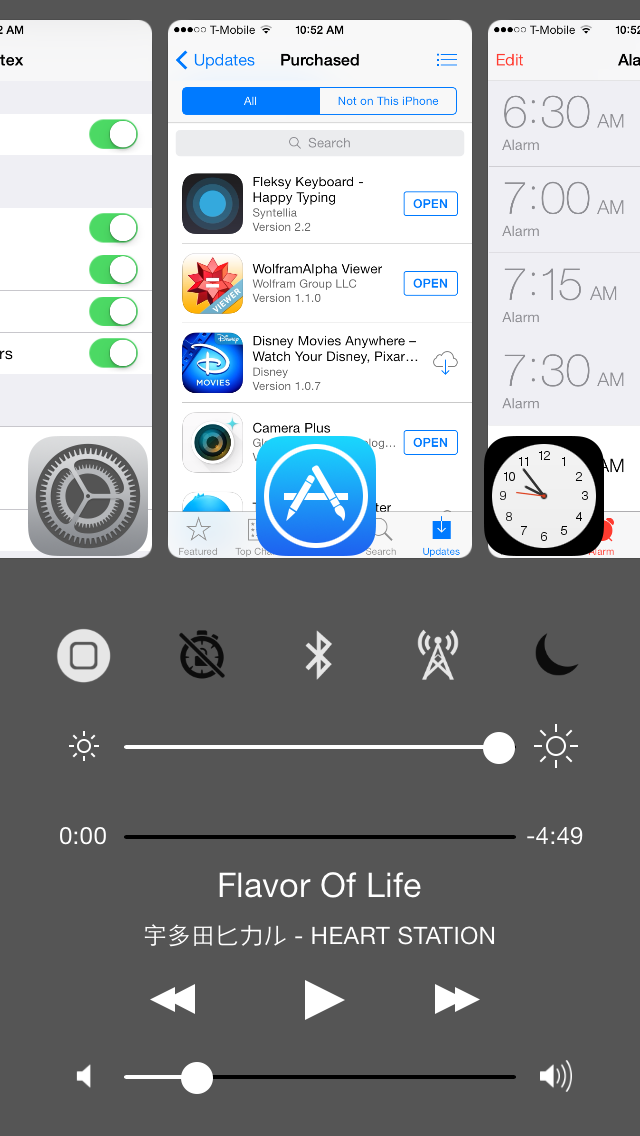 The remaining options contained within Vertex’s preferences are largely based on aesthetics. There’s the Switcher Icons toggle, which allows you to display the app icons on top of their associated app pages for quicker reference points. There’s the gray background, which pays homage to the original design that appeared on Dribble. And then there’s an option to make app preview cards have round corners, eschewing the standard 90 degree angles. 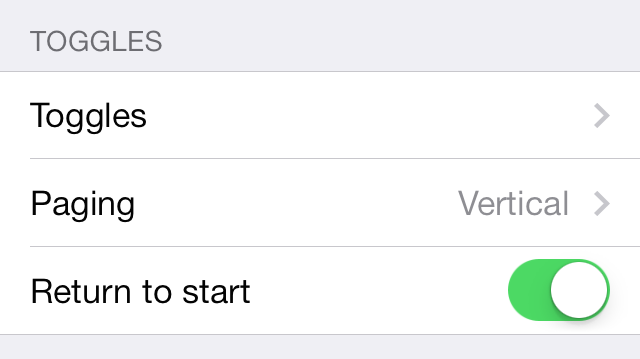 Lastly, you’ll find a section for Flipswitch toggles. These toggles can be rearranged in any order you desire, and there are options for both vertical and horizontal paging included as well.

While I think Vertex is a great new jailbreak tweak that many will find desirable, it features some design compromises that you’ll need to consider. The most obvious compromise was one that we already addressed earlier, that of not being able to access Control Center with the tweak’s Slide Up feature enabled.

Another compromise that you’ll need to take into consideration is the fact that Vertex doesn’t contain all of the functionality found in Control Center. For example, the QuickLaunch icons that you normally find at the bottom of Control Center’s interface are not present in Vertex. 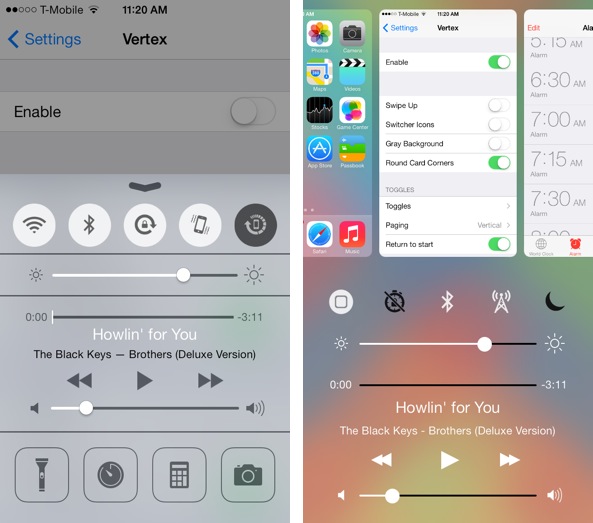 Perhaps the most obvious negative of combining the app switcher and Control Center together is the somewhat cluttered interface that results from the marriage. It’s like going from a spacious three bedroom apartment with one person to a one bedroom apartment with two people. It’s not that it’s unusable; there’s just a lot more for your eye to take in with so many elements on screen at once.

In the end, I think Vertex is a tweak that you should definitely try if you think having Control Center and the app switcher available in one window makes sense. I certainly think that it’ll work for a lot of people, but it’s something you’re going to have to try for yourself in order to know if it’s a viable long term solution.

The good news is that Vertex will be reasonably priced at $1.49 on Cydia’s BigBoss repo. So even if it doesn’t end up being the tweak for you, it’s not like you’ll have much buyer’s remorse.

Once you try Vertex, please be sure to let me know what you think about the tweak in the comment section below.