Intelliborn’s IntelliScreenX has been around for a few years now, and it continues its reign as one of the most popular jailbreak releases of all time. Even if you have beef with the way IntelliBorn goes about updating its Cydia releases, slowly trickling out nuggets of information, there’s simply no denying that it creates jailbreak apps more ambitious than only the most talented of jailbreak developers.

Even more so than iOS 6, iOS 7 was a radical departure from the status quo, and because of that, jailbreak developers have had to go back to the drawing board so to speak. Intelliborn hasn’t been exempt from this problem.

After months or retooling and remixing, and after what has essentially been a build from scratch, IntelliScreenX 7 is finally amongst the living. In fact, we have a beta copy of the highly anticipated release in our hands right now, and we’d love to show it to you.

If you’ve ever used any prior version of IntelliScreenX (ISX hereafter), then the ISX 7 experience will be largely familiar to you. ISX is primarily a Lock screen and Notification Center utility that allows you to manage Twitter, Mail, Facebook, RSS feeds, and more. Your Lock screen becomes a central hub for your most pressing information, and it goes beyond passive interaction.

After installing ISX 7, you’ll find two new preference panels within the stock Settings app. The settings for ISX 7 largely revolve around customizing the pages that appear within the Lock screen and Notification Center. There are also options to set the Lock screen dim delay, refresh rate for the information ticker, and lock screen blur and tint settings. 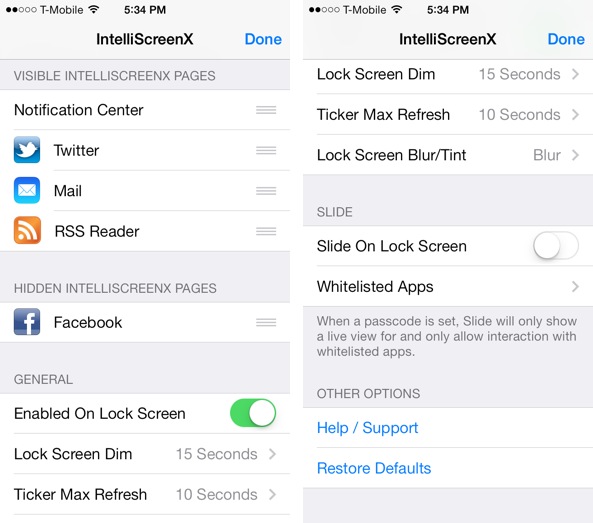 Many of the settings are intimately familiar to longtime ISX users

As with previous versions of ISX, the Messages+ package has been included free of charge. Messages+, which is a standalone Messages app add-on, integrates seamlessly with ISX 7 to allow you to quickly reply to incoming messages and compose new messages. You can compose new messages in three ways: using a button in the bottom left-hand corner of the Lock screen or Notification Center, or by means of an Activator gesture. 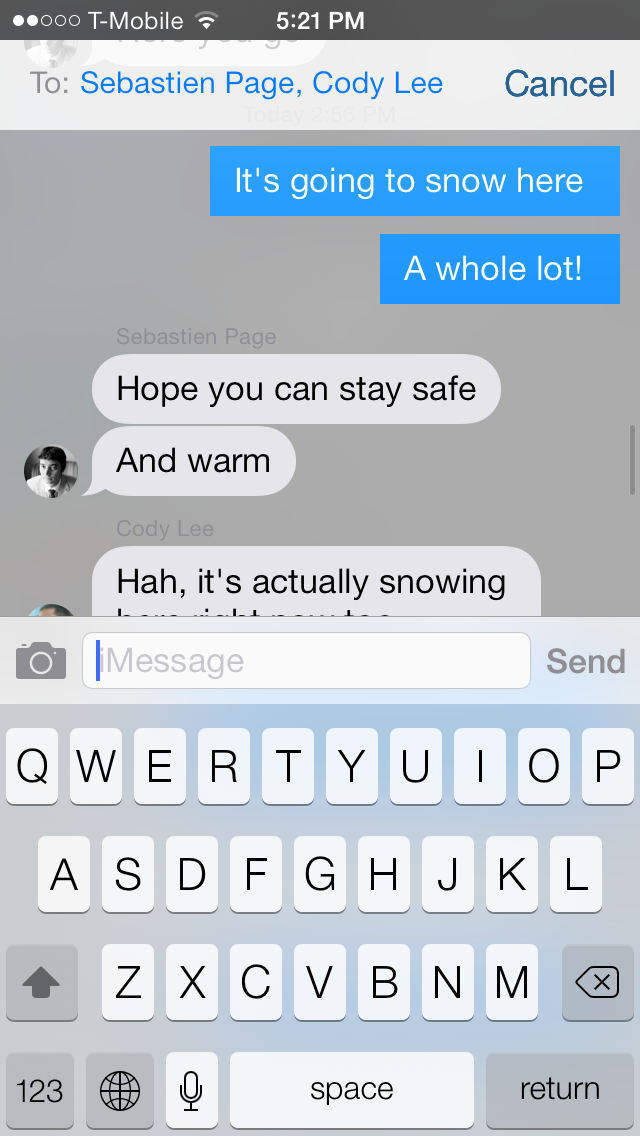 Messages+ is nowhere near as full featured as a standalone jailbreak Messages app like biteSMS, but it’s good enough if all you want is quick reply and quick compose features. By itself, it would be difficult to recommend over biteSMS, but since it’s thrown in for “free” with ISX 7, it’s not a bad value. 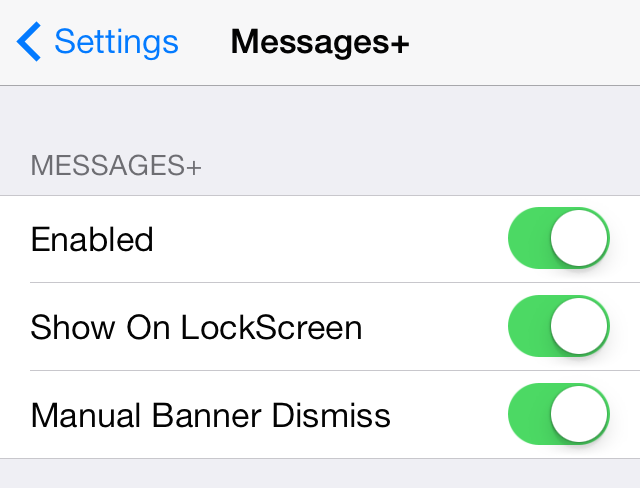 Messages+ features its own preference panel in the Settings app

ISX 7 would largely feel like an iOS 7 port of the previous version of ISX if it wasn’t for a sparkling new feature called Slide. Slide is a new built-in app switching interface that allows you to multitask using gestures. By sliding down from the upper left hand corner of the screen, or by invoking an Activator gesture, you’ll reveal a vertical bar populated with recently used app icons. Sliding those app icons from left to right reveals a drawer containing a full preview of the app. 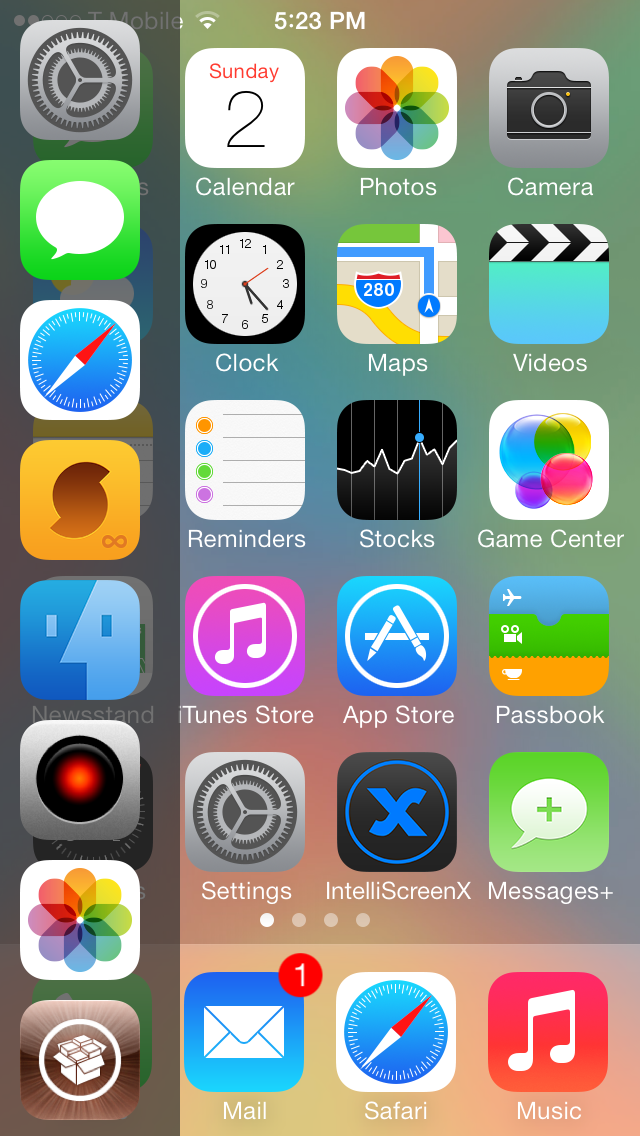 Slide can be accessed from anywhere

The great thing about Slide is that you can interface with the app as you slide it. You can, of course, fully extend the application to take up the full screen, which makes the app reside over the top of the content beneath it. Once you are finished interfacing with the app, you can press the Home button to hide it and resume your previous activity.

There are a couple of settings dedicated exclusively to Slide in ISX 7’s preferences. For starters, Slide can be disabled outright while on the Lock screen. You also have the ability to establish whitelisted apps that can be viewed even while a passcode is set. 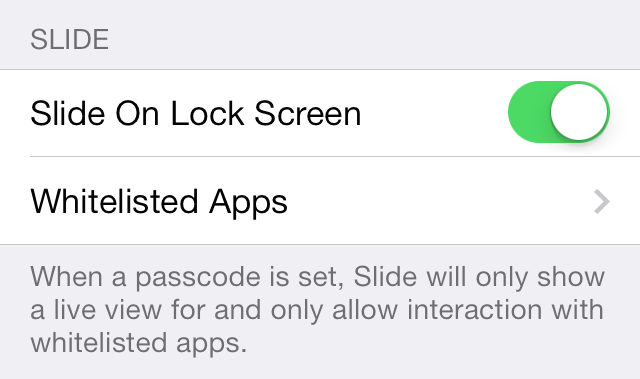 While I thoroughly enjoy Slide, I must admit that I’ve never been a major fan of the Mail, Facebook or RSS feed sections found in ISX 7. For me, having these features enabled results in information overload. That being said, I do love the idea of having my Twitter timeline right on my Lock screen. I love that I can quickly  view my mentions, and I delight in the ability to send tweets directly from the Lock screen or Notification Center. 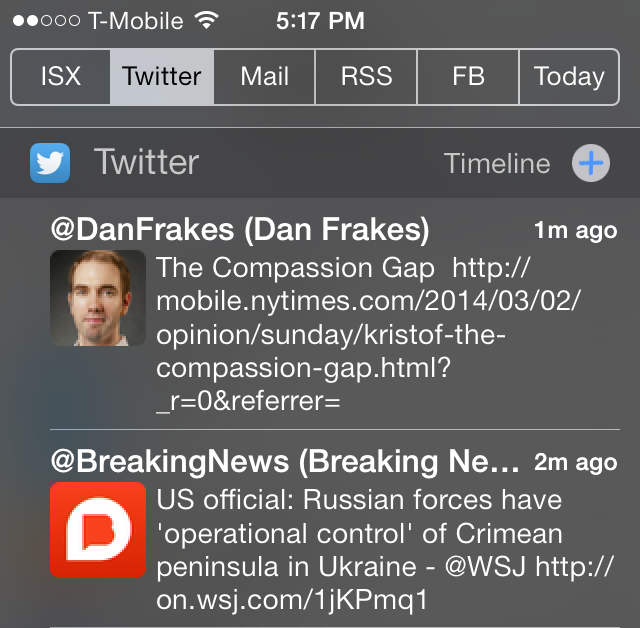 The Twitter timeline feature is my favorite thing about ISX

Even if you’re like me, and you don’t enjoy all of what ISX 7 has to offer, there’s probably something that the app does right to make it worth your time. It could be the Twitter features, perhaps the stock-ticker inspired information box found at the top of the interface, or maybe even the weather forecast. Or, perhaps it’s the new Slide multitasking bar—the flagship new feature found in ISX 7. Whatever the case may be, there’s bound to be something you’ll find worthwhile in ISX 7, and for that reason, I can recommend that you give this uber-ambitious jailbreak release a spin.