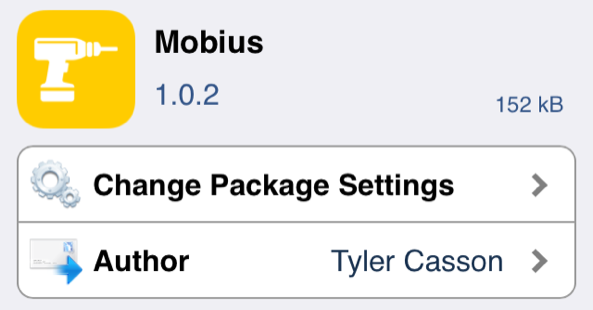 Developer Tyler Casson set out on a mission to bring the popular Wraparound functionality to iOS 7 when it became apparent that the Wraparound wasn’t going to be updated for iOS 7 any time soon. He’s since dubbed his tweak Mobius, and made it available free of charge on his own personal repo.

If you’d like to see how Mobius works in action, then check past the fold for our hands-on video walkthrough. You can also find the repo details inside so that you can try out the tweak for yourself.

Installing Mobius brings no new settings or options to configure; it’s a total install-and-go affair. Once installed, simply start swiping from page to page on your Home screen, and you’ll notice that once you reach the last page, it’ll wrap around to the first page, and vice versa. As mentioned, the same functionality works inside of iOS 7’s paginated folders as well.

Mobius is compatible with a heaping helping of other jailbreak tweaks, but Casson notes that one of the more popular tweaks—that being Barrel—doesn’t have full compatibility as of yet. But even without full Barrel support out of the box, Mobius is a fine successor to the seemingly defunct Wraparound tweak.

If you’d like to try Mobius for yourself, then add Tyler’s repo to your list of Cydia sources. His repo is as follows: repo.tylercasson.com

There’s still no word on whether or not Casson will release Mobius on the default Cydia repos, but perhaps if it gets popular enough he will decide to do so. What do you think?

Thanks to Joel Mattsson for the email alerting us about Mobius’ existence.