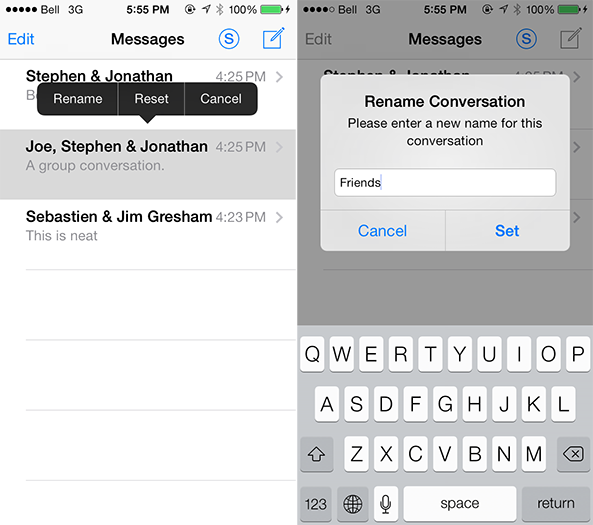 While popular cross-platform messaging services like WhatsApp and Facebook Messenger offer the ability to rename group conversations, the same cannot be said for the stock Messages app on iPhone, iPad and iPod touch. When you add two or more people to a conversation, the name of the group chat simply lists the names of the contacts you are messaging.

Fortunately, a past jailbreak tweak called MessageRenamer has been updated with both iOS 7 and 64-bit compatibility. The tweak, which was originally reviewed by our very own Jeff last August, allows you to easily change the name of any conversation in both the Messages app and biteSMS extension.  It could be a chat with just one other person, or several. Take a look at how it works ahead…

To rename a conversation, tap and hold on its header to reveal a pop-up menu with three options. The first is “rename,” which opens a text prompt where you can enter and save a new conversation name. “Reset” restores the changed name back to default, and tapping “cancel” closes the menu.

The ability to give your group conversations a more descriptive or contextual name is a welcomed feature, and something I’m surprised Apple hasn’t included as stock. For instance, if you are messaging coworkers or students about an ongoing project, it would probably make sense to rename the group to something work or school related. On a personal level, I renamed a group chat with Sebastien and Jim as iDownloadBlog writers.

The functionality of MessageRenamer7 remains the same as the past version, although developer Atlas Wegman claims to have entirely rewritten the extension  to be much more clean and efficient. I can attest to those changes, as the tweak does not suffer from the bugs that plagued it in its early days.

MessageRenamer7 is available now for 99 cents on Cydia in the default BigBoss repository, while the older iOS 6 version remains free. An update has recently been pushed to resolve some 64-bit issues, and that is expected to hit BigBoss soon. There are no options to configure in the Settings app after installation.

Which messaging platform do you use the most?