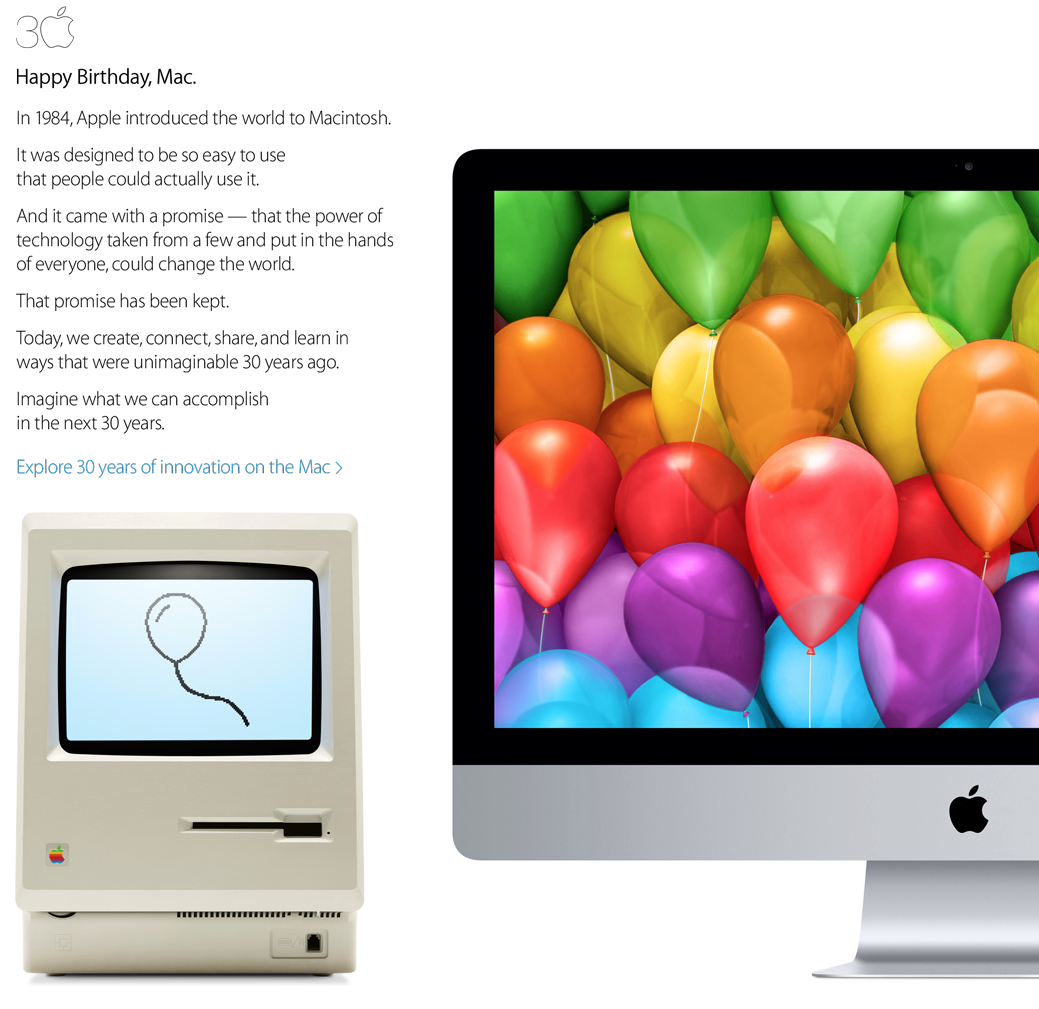 OK, Apple didn’t exactly return to Super Bowl with a 30th Mac anniversary ad like advertising legend Lee Clow a week ago hinted it would, but that doesn’t mean the company is letting the Super Bowl ad blitz mute its message.

Not only did Apple celebrate the occasion by letting ABC News and MacWorld interview CEO Tim Cook, it also posted an interactive Mac timeline on Apple.com and a new ‘Happy Birthday, Mac’ section on the Mac App Store, dressed up retail stores’ window displays in Mac-themed graphics and hung commemorative posters up on the walls of its Cupertino HQ.

The company even hid a custom font on its servers featuring gorgeous Mac model icons. And now, Apple has posted a new video on its homepage dedicated to the 30 years of Mac innovation. The 125-second clip was shot entirely on iPhones and edited on Macs, have a look at it right below the fold and meet us in comments…

The video, titled ‘1.24.14’, is available for streaming on Apple’s homepage and through its YouTube channel, have a look at it.

Thirty years ago Macintosh promised to put technology in the hands of the people. To celebrate Mac’s birthday, this film was shot around the world in one day, entirely on iPhone. Here’s to the next thirty.

Re/code reports that Apple spent the January 24 Mac anniversary filming the video in ten countries on five continents. It was filmed entirely on iPhones and edited over the past week on Macs.

The video, which debuts on Apple’s website Monday, begins by proclaiming that the Mac was introduced 30 years ago with the promise to “put technology in the hands of the people.”

In the next 125 seconds, Apple shows just how that promise is being fulfilled, with modern-day Macs being used around the globe to do everything from document an archaeological dig to control robots and conduct an orchestra.

A message on Apple’s website describes a story “30 years and one day in the making”:

On January 24, 1984, Apple introduced the Macintosh. And with it a promise that the power of technology, put in the hands of everyone, could change the world. On January 24, 2014, we sent 15 camera crews all over the world to show how that promise has become a reality.

From sunrise in Melbourne to nightfall in Los Angeles, they documented people doing amazing things with Apple products. They shot over 70 hours of footage — all with the iPhone 5s. Then it was edited and scored with an original soundtrack. Thanks to the power of the Mac and the innovations it has inspired, an effort that normally takes months was accomplished in a matter of days.

It’s interesting that Apple’s long-time ad agency TBWA\Worldwide was responsible for the filming. TBWA is chaired by Lee Clow, who was a close personal friend of Steve’s.

“While Clow’s ad agency did make the film, Apple opted to post the movie online and highlight it on its website,” the article reads.

As a reminder, Clow last week hinted at the possibility of a Super Bowl Apple ad.

Ok so it wasn’t a great Super Bowl. Tomorrow’s another day.