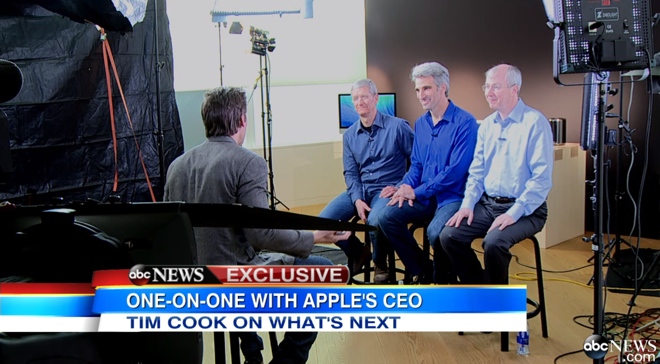 Rounding out Apple’s celebration of the Mac’s 30th anniversary on Friday, ABC aired an interview between its own David Muir and CEO Tim Cook. Senior VP Craig Federighi and VP Bud Tribble were also on hand, but Cook did most of the talking.

It was a short discussion, running for less than 5 minutes, and some of it has already been spoiled by preview clips. But for those who haven’t seen it, it’s worth watching, as Cook speaks out about major issues such as the recent NSA surveillance scare…

Tim Cook rarely gives interviews, and even more rarely goes on TV—his last appearance was on NBC’s Rock Center in 2012. But Apple execs have been very active in the media over the past week in an effort to promote the Macintosh’s 30th anniversary.

Last week, Federighi and Tribble joined Phil Schiller in an interview with Macworld regarding the future of the Mac. And on Friday, Apple dedicated its home page to its 30-year-old computer, and hung up posters honoring past and current employees.