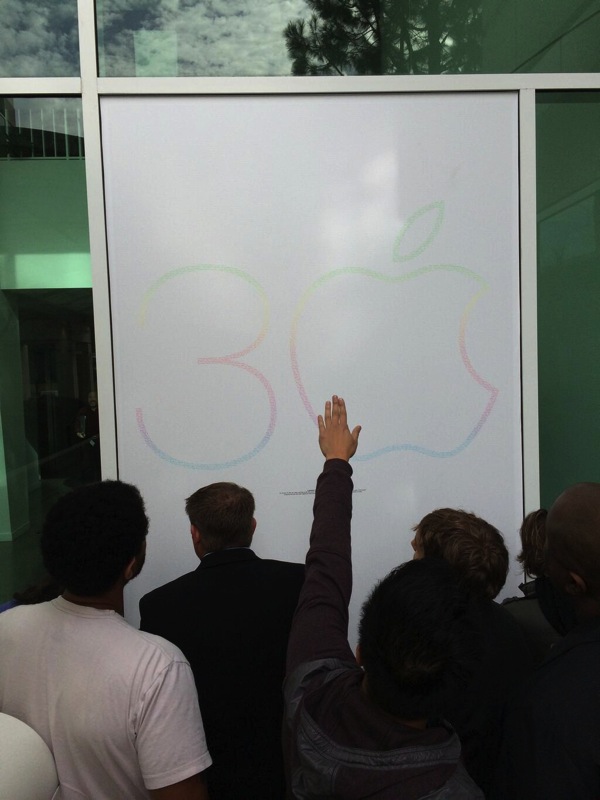 As part of the ongoing celebration for the 30th anniversary of the Mac, Apple has hung commemorative posters allover its Cupertino, California campus. There’s supposedly more than 10 of these giant posters marked with a big ’30.’

What’s really cool about the posters though, is what you don’t see. Apparently the 30 insignia (shown in the photo above) is made up of the names of people who either work at Apple now, or have worked with the company in the past…

MacRumors has the report:

“Apple has debuted a number of posters at its Cupertino Headquarters to celebrate the thirtieth anniversary of the Macintosh, with every employee who has ever worked for Apple listed in the order of their badge numbers. Some employees have already located their names, including Engineering Project Manager Michael Jurewitz.”

And here’s the photo Jurewitz tweeted:

It’s kind of cool when you think about it. These posters list the names of more than ten thousand employees that have, at some point, contributed to Apple and its success—a company that Steve Jobs and a couple of guys started in a garage.

In addition to the posters, Apple has also dedicated the home page of its website, decorated store windows and released a custom font of Mac models to celebrate the Mac’s 30th birthday. And tonight, ABC will air an interview with Tim Cook.