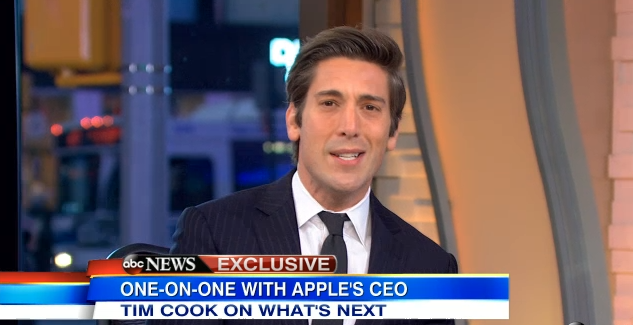 We’re still a few hours away from ABC airing David Muir’s interview with Tim Cook, but the network has been leaking tidbits of the discussion all day. Earlier we saw a clip of Cook talking about Apple’s new sapphire plant in Arizona, and now this.

ABC has posted another preview of tonight’s Cook interview. This time the CEO answers questions about Apple’s position on the recent NSA surveillance scandal, saying the Agency would have to “cart us out in a box” to gain access to their servers…

Here’s the clip (via MacRumors):

For those that missed it, Apple was named among 8 other tech giants last summer as willing participants in an NSA project called “PRISM.” The program allegedly gave the National Security Agency backdoor access to servers with each company’s user data.

Apple has since denied the claim, on a number of occasions, and has joined the fight with other tech firms for greater transparency from the government on court-ordered requests. Tim Cook himself has met with President Obama twice to discuss the topic.

The full interview with Tim Cook will air tonight on ABC at 6:30PM Eastern time, and yes we will be watching for anything note-worthy. In the meantime, be sure to check out Macworld’s interview with 3 of Apple’s leaders on where the Mac is headed.