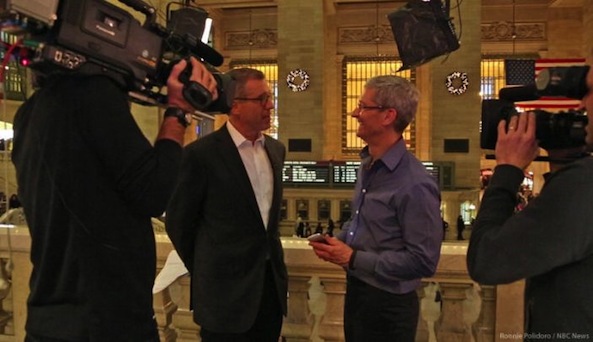 Earlier this evening, Tim Cook sat down with Brian Williams on NBC’s Rock Center and gave his first TV interview since he became Apple’s CEO. The two talked about a number of things including Steve Jobs, Apple’s plans for the television, and the Maps debacle.

If you missed the show, don’t worry, iDB has you covered. We’ve got part 1 and part 2 of Cook’s interview for you after the fold. Unfortunately, NBC still insists on using Flash to post its videos, so you’ll need to be on compatible hardware in order to view them…

The discussion kicks off at an Apple Store in lower Manhattan, and Williams’ first question for Cook is a doozy: “How are you not Steve Jobs?” He responds by saying that Jobs told him on several occasions to never question what he would do, but to “just do what was right.”

Williams then moves on to iOS Maps — Apple’s in-house replacement for Google Maps. The company has taken quite a bit of heat over the premature launch, which eventually led to a public apology and possibly an executive leaving. “How big of a set back was Maps?” he asked.

“It didn’t meet our customers expectations, and our expectations of ourselves are even higher than our customers. However, I can tell you — we screwed up — we are putting the weight of the company behind correcting it.”

Cook skillfully breezes past Williams’ direct question about Forstall’s ousting and the discussion moves on to other topics like Apple’s legendary secrecy and the new Lightning dock connector. And eventually it arrives at Samsung and its latest Apple-bashing TV ad.

“They came along and tried to paint those with white earbuds — Apple users — as losers. They’re trying to paint their product as cool, and yours as not cool,” Williams comments. Then, alluding to their patent litigation, he asks, “Is this thermonuclear war?” Cook responds:

“We love our customers, and we’ll fight to defend them with anyone. Is it thermonuclear war? The reality is that we love competition at Apple. We think it makes us all better. But we want people to invent their own stuff.”

Part 2 of the conversation also includes some interesting tidbits, and Cook talks about why Apple outsources its manufacturing. But the juiciest part comes when Williams asks “What can Apple do for television watching? What do you know that is going to change the game?”

“It’s a market that we see, that has been left behind. You know, I used to watch “The Jetsons” as a kid. I love “The Jetsons.” We’re living “The Jetsons” with this [iPhone]. It’s an area of intense interest. I can’t say more than that.”

Between Cook saying that he can’t speak to Apple’s future television plans, and the coy smile on his face, you have to think that there just may be some truth to the rumors. You know, a lot of people thought that there was no way Apple would make an iPad mini, yet here we are.

For me, that was the highlight of the interview. Up until now, all we’ve heard about Apple’s purported TV strategy has come via pundits, and analysts with sketchy supply chain sources. But this, I think this proves that Apple has something up its sleeve for the living room.

What did you think?