Apple has updated its App Store support page for developers this week to reflect new information regarding iOS 7 adoption. According to the company’s usage data, the new OS is running on 80% of iOS devices accessing the App Store.

That’s just a small jump from December of last year, when it was reported that iOS 7 adoption had hit 78%, but Apple said on its earnings call just a few moments ago that it’s enough to make iOS 7 the most popular OS in the world… 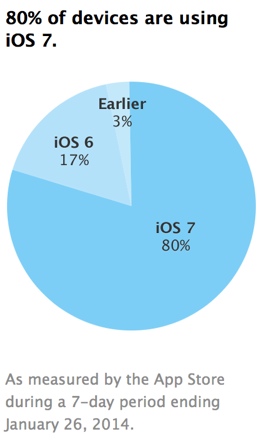 With more than every 3 out of 4 users running iOS 7 now, that presents a compelling case for developers to either update their current apps to support the new OS or to build for it exclusively, which we have been seeing a lot of lately.

Also keep in mind that Apple told developers last month that starting February 1 of this year, new apps and app updates submitted to the App Store will have to be optimized to work with iOS 7 firmware. Otherwise they’ll be rejected.