Apple has updated its App Store support page for developers this week to reflect new data regarding iOS 7 adoption. According to the company’s usage data, the new operating system is running on 78% of iOS devices accessing the App Store.

That’s a nice little jump up from earlier this month, when Apple noted that iOS 7 adoption had hit 74%. The move can be attributed to the success of the iPhone and iPad over the holiday season and [possibly] the just-released iOS 7 jailbreak… 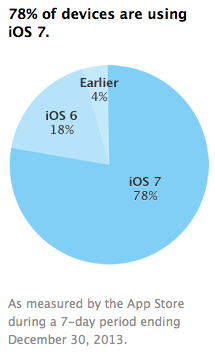 With every 3 out of 4 users (or I guess more than that) now running iOS 7, that presents a compelling case for developers to either update their current apps to support the new OS or to build for it exclusively, which we’ve been seeing a lot of lately.

Earlier this month, Apple told developers that starting February 1 of next year new apps and app updates submitted to the App Store will have to be built with the latest version of Xcode 5 and must be optimized for iOS 7. Otherwise they’ll be rejected.