And just like that, the holidays are over. It seems like we spend a lot of time preparing—decorating, shopping, etc.—for something that goes by in the blink of an eye. But that’s ok, for a lot of folks that blink of an eye brought presents like new iOS hardware.

In fact, if you received a new iPhone or iPad this Christmas, you’re in good company. According to data published by mobile analytics firm Flurry, Apple device activations grew 2.3 times on Christmas Day (versus an average day in December) this year…

Here’s an excerpt from Flurry’s report:

“In each of the past three years, Apple has experienced a larger Christmas lift than Samsung; however the gap between them narrowed this year compared to previous years. While the magnitude of the Christmas increase is smaller for these manufacturers than for Amazon, their baseline level of activations is so large that even a doubling of daily activations on Christmas (1.9x for Samsung and 2.3x for Apple this year, according to our data) represents a large number of devices.”

And here’s a graph showing the breakdown: 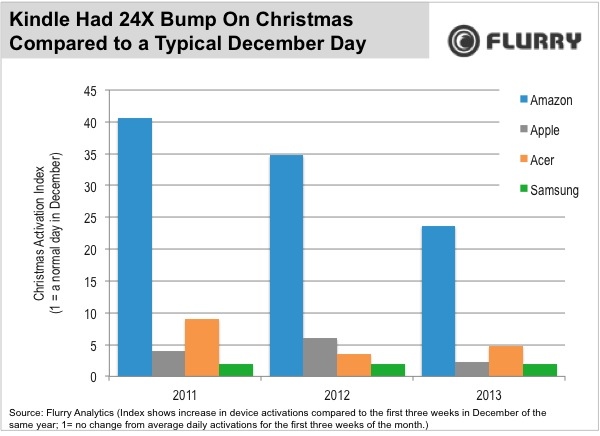 While Apple did its part by growing its number of device activations this year, and beating its rival Samsung, it couldn’t top Acer, who grew activations about 5 times on Christmas Day. And it didn’t come close to Amazon, who grew Kindle activations by 24x.

But it’s not hard to see why these items are so popular as Christmas gifts—they’re less expensive. Not to mention, as Flurry points out, that companies like Apple and Samsung already activate so many devices per day, that even doubling that number is huge.

Of course, the bigger question here (for us anyway) is: how many total iPhones and iPads did Apple sell during this holiday season? Keep in mind that they launched two new handsets and two new tablets, on more carriers and in more places than ever before.

We’ll find out in late January.