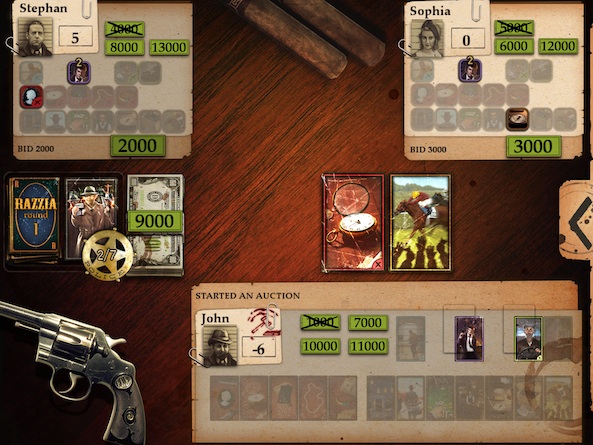 I may not have lived throught the height of the heyday of the Mafia, or even know much about the existence of family crime lords (other than what I saw in the Sopranos), but I’ve seen The Godfather enough times to know that these underground gangs want money, power, and a little bit of fame.

Razzia is an iOS app based on the board game of the same name. Players act as the head of the Family in a bid for all of the stolen goods. The player with the stuff proves to be the biggest Mafia leader around…

As is typical with games in the genre, the display shows what is likely the same set up as a physical tabletop. Although I have not played Razzia in real life, I know that each player has their own card area, plus there are a number of “booty” cards, policemen cards, and “checks.” Each player has items in their card area, plus the action portion of the board houses the unrevealed decks.

The game offers a comprehensive tutorial for beginners to the game. If you already know how to play Razzia, you can read the short explanation, which updates you on the changes to the iOS version of this game.

In your player card area you will see the four checks that have been distributed to each player. Each round, checks are distributed in a specific number to each player, depending on how many players there are. In one round, you may have high checks, which is bad for low-auction bids. In another, you may have all low checks, which won’t help you if someone else can bid higher.

There is also a booty deck, a police deck, and a check deck. Cards are drawn from the booty deck to show the item that is up for auction. Police cards trigger an automatic auction. After seven police cards have been revealed, a round ends. The check deck is where checks that you have used will go.

To find out more about a card, tap the picture. You will see the type of card, how many are left in the game, and important point scoring information about it. For example, Bodyguards offer five points, but only if you have the most bodyguards in a round. If you have the least number of bodyguards, you will lose two points. Each card shows you information on that item, plus all others in play. 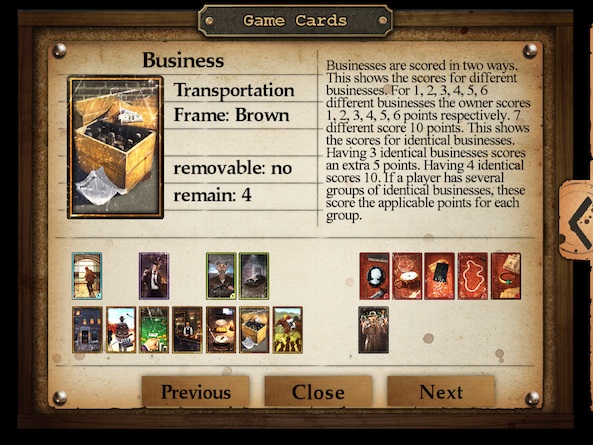 This is a bidding game, or auction game. The goal is to score the most points by buying up the stuff that the Mafia families have collected. Points are earned in different ways. You don’t just win if you have the most businesses. Players earn different points for the number of businesses they own. Plus, you will earn additional points for identical businesses. It is important to familiarize yourself with the point scoring so that you can pay close attention to what cards you think are worth buying during the auction.

When it is your turn, you can start an auction, reveal a booty card, or steal a revealed booty card if you have the thief in your possession. If you choose to reveal a card, the game moves onto the next player. If you choose to start an auction, all other players bid on an item except you. You get to see what everyone else has bid and decide if it is worth the money to bid higher than them. If you don’t wish to bid, you can pass on an auction.

If you reveal a policemen card, the auction begins automatically, starting with the person to your left, so you will still get to see if it is worth it to bid on a card, or set of cards.

If you end up with a thief card in one of the auctions you win, you can use it to automatically steal a card in the revealed booty pile. This makes it easy for you to get one particular card you may want without having to spend money on the entire auction.

At the end of three rounds, the game’s points are tallied based on what items you had in your hand by the end. If you have the right number of items in the right combination, you will win. 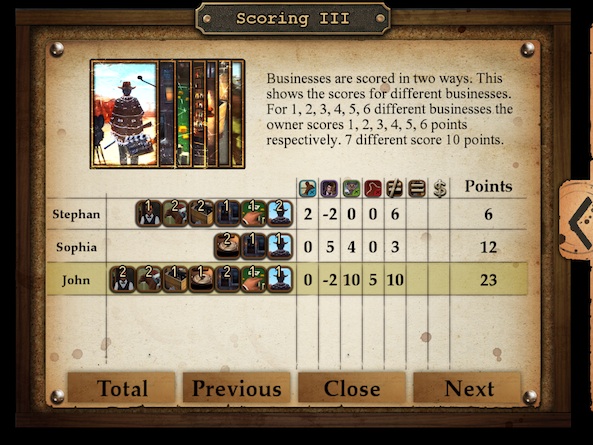 The game has a very comprehensive tutorial so that people who have never played Razzia, or any bidding game, will be able to easily learn what to do next.

Although you can play against others online in Multiplayer mode, this game is not connected to Game Center. You must play against opponents by connecting to Facebook, AidemConnect, or Anonymus.

The print on the iPhone is very small and difficult to read.

Reiner Knizia’s Razzia – The Mafia Board Game costs $2.99, which is a great price for a board game. Most games in the genre run at least $4.99, and usually more. The game has a very high replay value since you can play alone against artificial intelligent opponents, with friends in the same room through pass-and-play, or online against other players.

If you already know how to play bidding style board games, this is right in league with the best of them. If you are a fan of board games in general, you’ll know that Reiner Knizia makes top-quality titles and the iOS version of this game is approved by the good doctor. If you don’t know anything about bidding games, you won’t be breaking the bank by giving this game a try. You can download it for iPad or iPhone in the App Store today.

Ra is the base version of the bidding game. I also have a list of my other favorite board games. Stone Age is an empire building board game. Rivals for Catan is a great card game based on the full Catan land grab game.