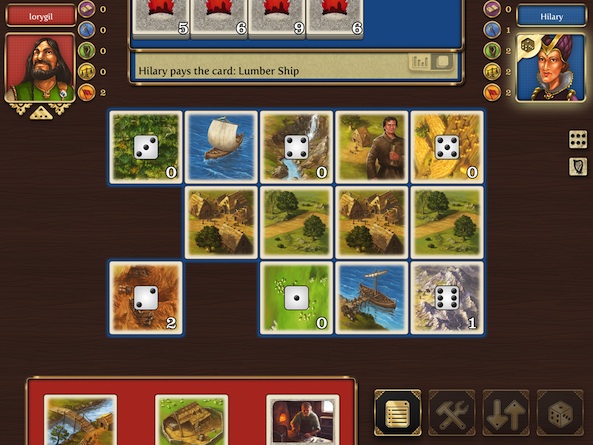 Board game players of all types fell in love with the iOS version of Settlers for Catan when it launched in the App Store. The empire building game has been a big hit since it first launched in 1995. There are even tournaments around the world on a regular basis.

Rivals for Catan is a pared down version of the Settlers board game and the iOS version is a digital recreation of the card game itself. Thanks to the universal port from USM, we have another way to play our favorite board games by ourselves…

If you play Rivals, you will recognize that the cards utilize the same artwork as the physical game. The familiar landscape of the mountain regions, roads, and settlements will make you feel right at home.

The virtual table has plenty of room for you and your opponent to lay down your various realm expansion cards. You can pinch to zoom in for a close look at your own playing field, or zoom out for a broad view of both yours and your rival’s growing township.

Each player’s actions are listed below the game’s deck, which is displayed at the center top of the screen. You can switch from a view of the game’s new card decks to your stats, which shows you how many of each resource you currently hold.

Yours and your opponent’s avatar sit at the top right and left corners. Next to the avatar you will see other statistics, like how many victories or strength points you currently have.

When you are playing against a computer-generated opponent, his or her actions will take place in real time. For example, trading resources and building settlements happen the same way they would against a real player. There is no feature to let you speed up your AI opponent’s action.

The game includes a comprehensive card almanac that lets you check out the abilities and cost of each card. 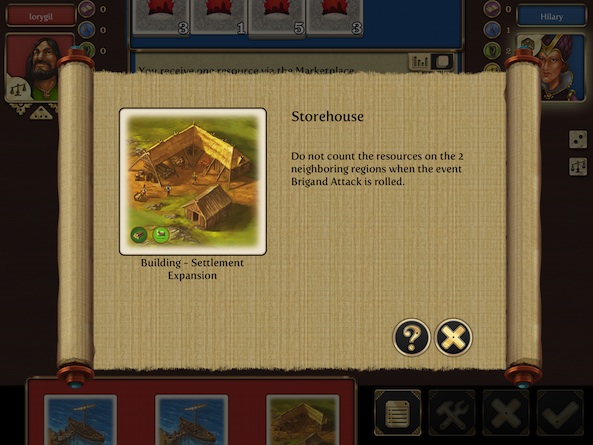 When you play the game for the first time, you will be directed to play the tutorial. This is an absolute must for new players to the game. However, if you have played the physical card game before, you can skip the tutorial. You will be able to figure out the game’s mechanics without needing the how-to guide.

If you are new to Rivals for Catan, you must be patient with the tutorial game. Play the entire thing. It lasts about a half hour. The game does not include any text-based guide, other than the card almanac, so it can feel overwhelming at first. But, if you play through the entire tutorial, you will get the hang of things pretty fast.

Players pick cards from their deck and play what they can from their hand. Each building card costs resources to play. You start the game with six resource development cards on the board and earn resources from them by rolling the dice that matches. For example, if the resource for gold has the number five next to it, you will earn one resource every time you roll a five on the die. You can earn additional resources by playing helpful cards, trading for other resources, and stealing them from your opponents. Resources are important because they help you grow your town.

To play a card from your hand, select it. If you have enough resources, there will be a check mark at the bottom right corner. If you don’t, there will be a question mark instead. If you have enough resources to play a card, tap the check mark and the app will offer you the options for placement. A good strategy involves placing building cards in ideal locations. For example, if you have a grain mill, place it adjacent to a field resource. This action will double the grain production of that field. If you are really good, you will be able to place a production booster card between two matching fields.

At the end of the action portion of your turn, you will be able to draw a new card from the deck if you have less than three cards in your hand. You can also discard one of your current cards in exchange for a new one from the deck. You can pay two resources to get a glimpse at the deck of your choosing and pick the card you want.

There are plenty of rules to this game that you will have to figure out by playing along or by checking out the Rivals for Catan instruction guide.

You can play the game with another person through Game Center or in real life using pass-and-play. I was unsuccessful at playing a Game Center game. I tried multiple times and, either was never connected to Game Center, or was kicked out when the game started.

The game also comes with three theme decks, Era of Gold, Era of Progress, and Era of Turmoil. Additionally, once you’ve familiarized yourself with the individual themed decks, you can play the Duel of the Princes, which includes cards from all three themes. Each theme includes a tutorial so you can learn what the new cards are for and what the new gameplay is like. 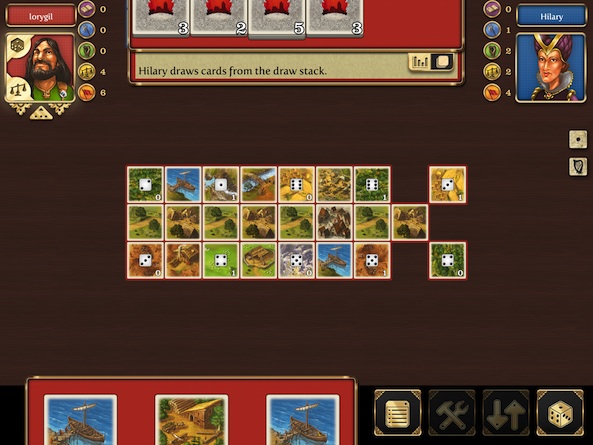 If you play Rivals for Catan, you will love the iOS version. It comes with all three decks and the ability to play the Duel of the Princes. If you have never played the physical card game, you can easily learn how by playing the tutorial games for each of the themes, plus the basic.

Unfortunately, there are two major bugs that will frustrate users pretty badly. The first is that you can’t play online multiplayer mode due to a glitch in the Game Center connection. You can still practice your skills by playing solo against an AI opponent, though.

The other is that you can’t save your game and then exit the app. If you close out the app in multitasking, you will lose your game. If you exit to the main menu, you will lose the game. The only way your progress will not be lost is if you don’t exit to the main menu and you don’t close out the app in multitasking (essentially, keeping the game open, but not in use). This error occurred on my third-generation iPad and iPhone 5, so the bug probably affects all devices.

For only $3.99, you can play the basic Rivals for Catan game, plus the three additional theme packs. The physical board game costs $20 and you have to play with another real-life person. I’d say that is a pretty good deal. Plus, you don’t have to bug your friends to get together every week for a game of Catan.

If you play Rivals for Catan and would like the option of playing it alone, this app will make it possible for you to have your own board game night, every night. If you have never played Rivals, but do enjoy a good empire building game, you’ll have fun with this, too. The price is reasonable for the genre. Unfortunately, a serious bug renders the game useless for online multiplayer gaming, so if you are hoping to compete against others, you should wait until the glitch is fixed before buying the game or you will be disappointed. Rivals for Catan is available on the iPhone, iPad, and iPod touch. Pick it up in the App Store today.