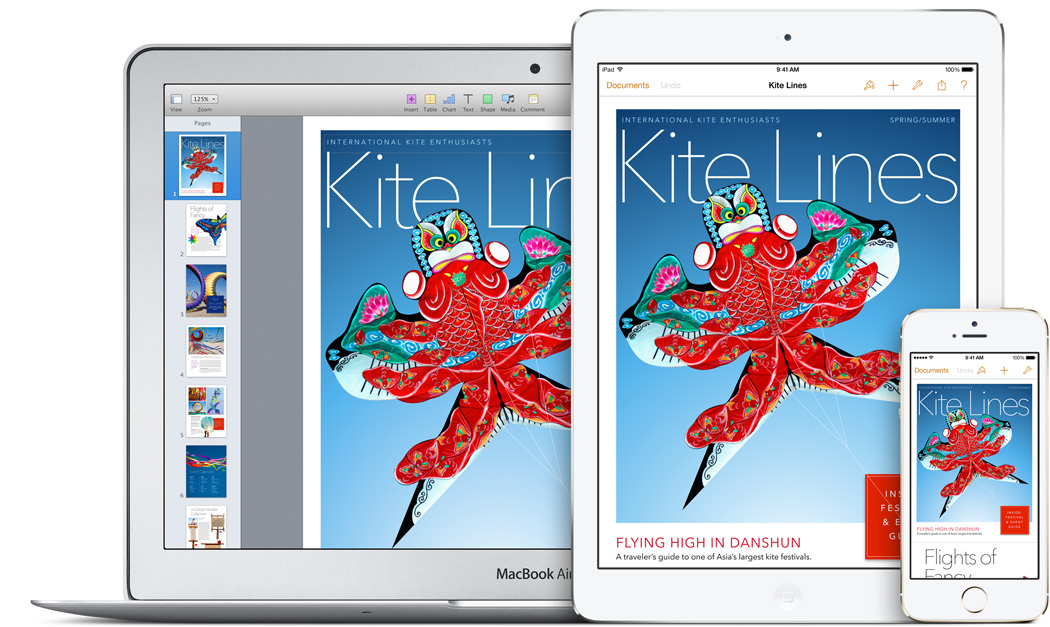 Much fuss has been made in the tech press over the most recent market share data by IDC and Gartner showing Google’s Android growing unabated and commanding a whopping 80 percent of smartphones, though some caution that these estimates are flawed because they include cheap no-name Android handsets as well as Android-based HDMI dongles and other non-smartphone devices from China.

Google said back in July that Android activations surpassed one billion devices. The bigger question is, when will there be one billion iOS devices in use?

We know based on Tim Cook’s remarks from the September 10 double-iPhone reveal that Apple last month shipped its 700 millionth iOS device, but not every device is in active use.

For example, Some people own more than one iDevice. Others, on the other hand, may no longer hold on to legacy hardware at all. On top of that, there are those who may have recycled or broken their old device. 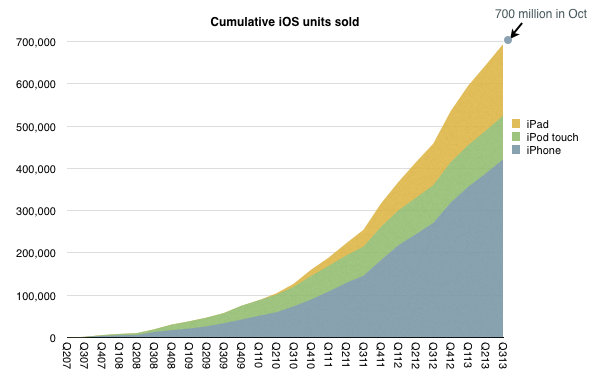 Independent analyst Horace Dediu (one of the most accurate out there when it comes to estimates) thinks – based on certain device replacement assumptions and patters – that out of the 700 million iPhones, iPod touches and iPads sold, some five hundred million units are currently in active use. 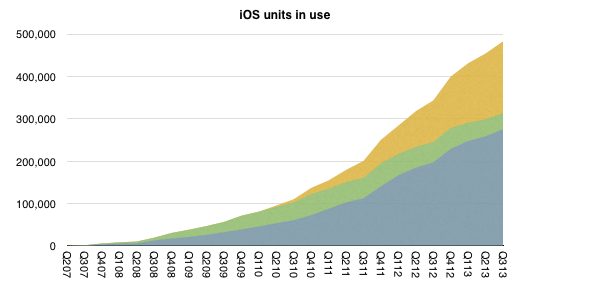 Assuming that at 500 million iOS is at the half-way point in its growth (50 percent penetration) – and based history data and the period after the iPhone 3G launched, Dediu estimates there will be nearly one billion iOS devices in active use by the end of 2018, or five years from today.

Note that this does not mean one billion iOS users. The attach rate for iOS devices per user could well reach 2 by then placing total user base at 500 million. Note that this size of audience is very nearly the existing total Apple audience already (counting iTunes/iCloud accounts).

This means that we already have “existence proof” that Apple can reach half-a-billion users. Apple does not need to discover a large new set of non-consumers. The idea of 1 billion iOS devices is simply the projection that each current user could some day use two devices.

By that time, of course, Android will have been on many more smartphones, tablets, television sets, HDMI dongles, set-top boxes, game consoles and what not, though I’m not so sure that Google’s ad platform will overtake Apple’s app platform in terms of profitability and developer loyalty anytime soon.

There’s a good reason why Apple’s iOS with only one-fifth of the world’s market share for smartphones commands nearly two-thirds of industry profits and I’m expecting the trend to continue for the time being.