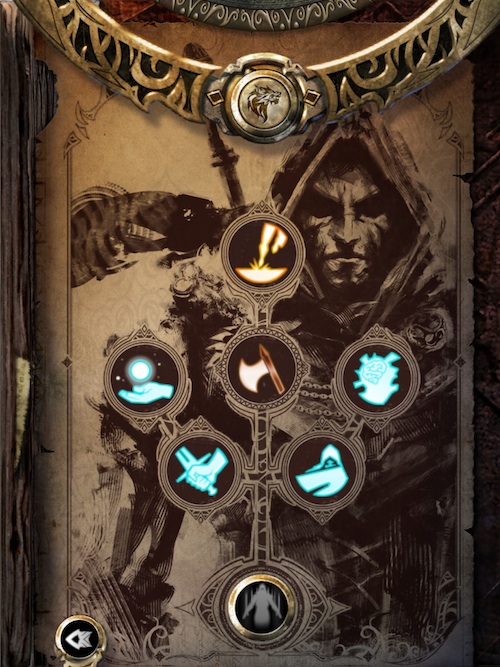 As many of our readers know by now, I am a huge fan of tabletop adventure games. Whether it is a Dungeons and Dragons style role-playing game, a stats-based board game, or a gamebook adventure, I’m interested in it. If it requires more than six-sided dice to play, I’m going geek over it.

Joe Dever’s Lone Wolf is a gamebook game that incorporates a bit of Infinity Blade style hand-to-hand combat against baddies that won’t go away. Hack your way through the city to clean out the riff raff and rebuild a destroyed community…

Fans of choose-your-own adventure games will note the beautifully designed tome that opens when you start the game. The menu screen looks like a table of contents. As you turn each page, the letters slowly appear on screen as if they are magically being written as you play. In a way, they are. You decide what your character is, and as your abilities and equipment are chosen, the story continues with the new information.

When you are faced with a decision, a small icon will appear on the page. Tap it to be transported to the action. If you decide to climb a cliff, you will switch to a section where you must tap the screen at very specific intervals in order to pass your climb check. If you make it, the story continues.

In addition to simple skill checks, players will be faced with action combat against non-player characters. Instead of being based solely on stats and the randomness of rolling dice, players must use a series of taps and swipes in order to defeat their foes.

If, for some reason, you die during the game (which I did plenty of times during battle), you have multiple choices to continue the game. You can either start from the most recent checkpoint, go back to the main menu and play from the last place the game saved, restart the current battle, or replay the battle with a lower level of difficulty and less reward.

As the game progresses, players will be able to choose which direction they will go along the path through town. Depending on which way you go, you will be faced with a different storyline.

Players are also faced with mini games where they must use their skills at lock picking. To open a lock, you must find the exact right position. Rotate the pick by dragging you finger to the left or right on the screen. Then, try to force the lock with your knife to pry it open. When forced, the lock will move until it unlocks. If you do it wrong, you will eventually break your pick and have to start over. 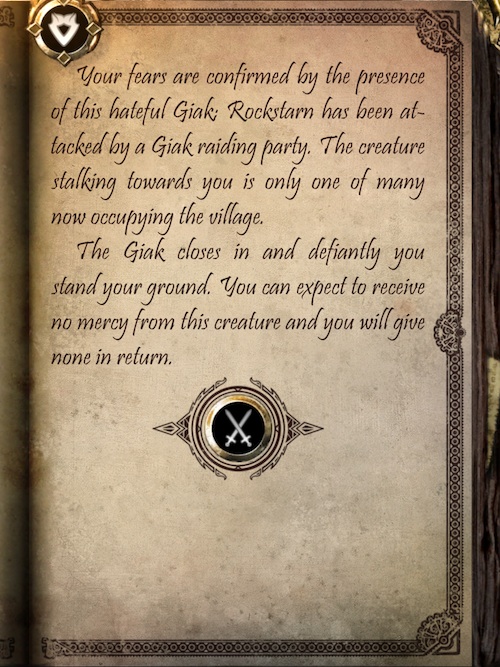 When you begin your adventure, you will be asked a series of questions that will determine what type of adventurer you will play. You can pick brute strength, pure intellect, or a little of both. All three options have their strengths and weaknesses. Choose the options that best fit your gaming style. If you tend to bowl doors down by charging into them, select strength-based abilities. If you prefer to think out the issue and come to a logical conclusion, or use spells to get around a problem, choose intellect. If you are the kind of gamer who likes to be well rounded, but not exceptional at any one thing, choose the balanced character.

After you have created your character, your adventure begins. As you travel through the town, you will be faced with choices, like whether you should break open the door, or try to find another way. You will also have to pick a couple of locks in order to get into some rooms. Failure to complete the lock-picking mini games result in missing out on getting into a room.

You will also be faced with the dreaded Giaks. These little monstrosities are practically around every corner and they are not particularly easy to kill. You have to have quick reflexes and, at least some understanding of strength, endurance, and power (Kai power in this story). If you use too much endurance on an attack, you will leave yourself vulnerable and easier to beat. You’ll need to use your shield and defense abilities alongside your attacks or you will not make it through a three or four-Giak attack.

When you go into a battle, you will see what your options are. Each weapon will have a glowing circle around it. Choose which weapon you wish to attack with, sword, axe, or throwing knives (each character has different weapons, depending on what they chose for their characters at the beginning).

Your attacks and defensive moves are based on Quick Time Events (QTE). When you choose one attack, you must perform one or more series of taps and swipes in order to successfully complete the move. There are different types of QTEs depending on what you want to do.

After you win a battle, you will be rewarded with various items that you can use throughout the game. They will be stored in your inventory. To access the inventory, tap the menu screen at the top of the page and then tap the inventory chest at the bottom of the page. Here, you can add items to your action slots, equipment items, and additional carrying pouches. Different items offer different effects. A bowl of soup will heal you. A necklace will give you additional dexterity points. Similar to stats-based adventure games, the more you adventure and find loot, the better your character becomes at fighting enemies. And there are a lot of those. 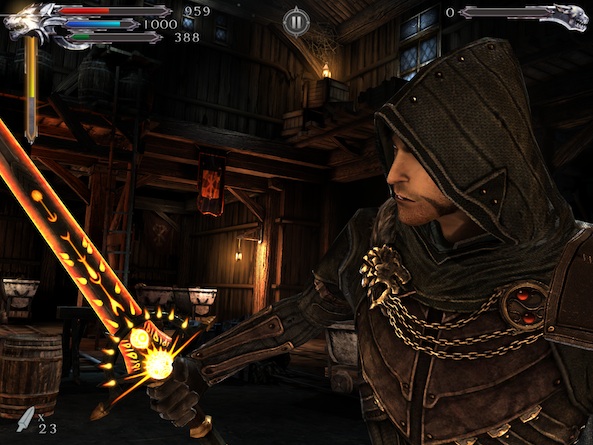 This is definitely one of the better gamebook stories out there. It is similar to Sorcery! in that it adds different elements to a traditional genre that make it different than anything you’ve played before. There are plenty of fun choices that involve extra action to give you more to do than just read.

I’m not exactly sure why the game’s developers decided to add the Infinity Blade style battle sequences to this story. It is very un-gamebook like. Its not that I hated it, but I felt like I was playing a dungeon crawl game instead of enjoying a story driven adventure.

Joe Dever’s Lone Wolf costs $4.99, which is the average price of a game in this genre. Think of how much you might spend on a paperback book. If you know what gamebooks are, it is significantly cheaper than one of the adventures in this series. Where the real value lies is in the $9.99 purchase of the rest of the series. There are a total of four books in this particular series. If you buy the season pass, acts 2, 3, and 4 will be automatically added to your bookshelf when they come out. So, you will get the whole series for about $15 instead of $20.

Just like the Steve Jackson’s Sorcery! series of books, this is definitely one to add to your collection if you are a fan of gamebook games. Especially because there are so few of them in the App Store at all, and this one stands out for the interesting action-based battles that take place throughout the story. Download it in the App Store today.