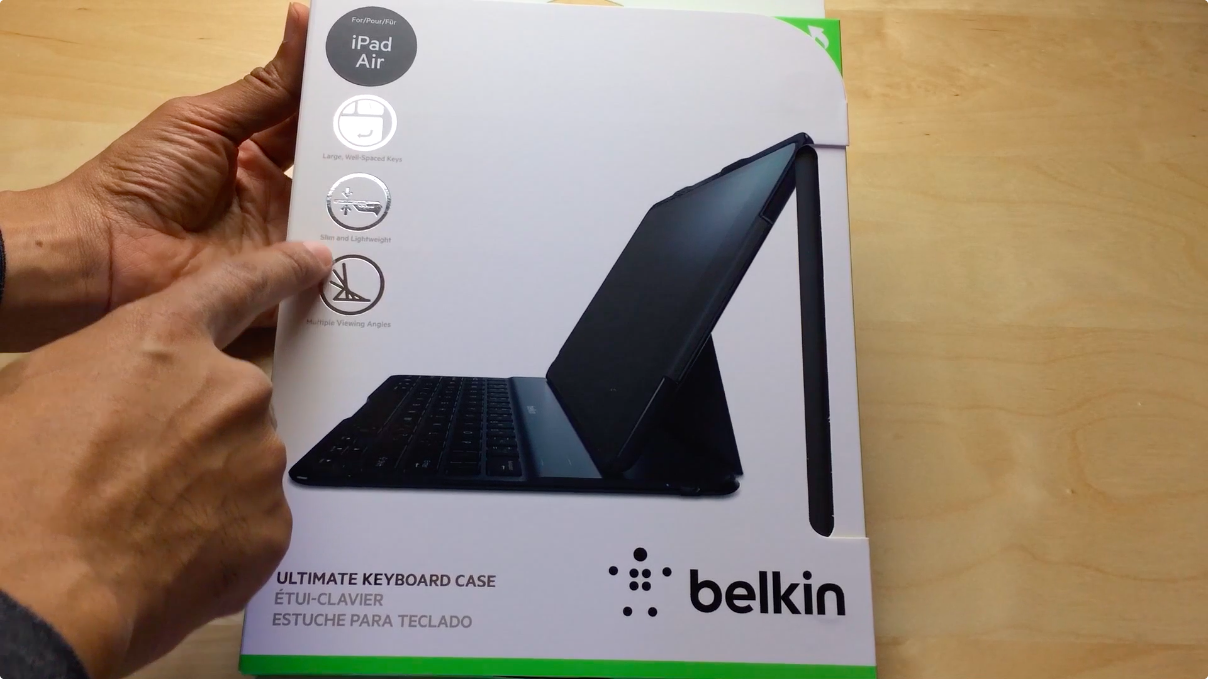 Both cases provide iPad owners with a physical Bluetooth enabled keyboard, which is handy for serious typists. While many are able to get by with tap typing on iOS’ software keyboard, there’s simply no arguing against the fact that a physical keyboard is superior in virtually every way.

So, which one is right for you?

With that in mind, either of these keyboards will be suitable for getting things done in a more efficient fashion. There are pluses and minuses when it comes to both, but if basic typing is they key, either will be better than the software keyboard.

The Slim Style model is probably a bit better as far as pure typing goes, because it features a full size keyboard with dedicated iOS shortcut keys that don’t need to be toggled using a function key. It also features more room for your hands and fingers to roam around its surface; this due to the recessed location of the keyboard itself.

There are other minor differences between the two keyboards, things like key labels and shortcut location, but the basic form and function is near identical. For instance, the key depth, key size, and build material of they actual keys share the same properties between both.

That’s largely where the similarities between the two end. While it’s true that both products are cases with embedded keyboards, they couldn’t be any more different in other aspects.

The Belkin Slim Style Keyboard Case is the cheaper of the two, coming in at $79.99 on Amazon. It features soft touch material — an almost rubber like quality on the exterior of the case. Inside, you’re greeted with the same material on the area beneath the keyboard, and a suede-like material underneath the area designated to hold the iPad Air.

Inserting the iPad Air into the Slim Style Keyboard Case was a breeze. Two flaps, held in place by elastic connectors, secure the iPad Air in a snug sure-fitted fashion.

There are cutouts in all of the necessary places to accommodate the Air’s buttons, switches, speakers, microphones, etc. By the way, the iPad Air features two microphones, a new one on the back of the device, and each case makes sure to look out for both. 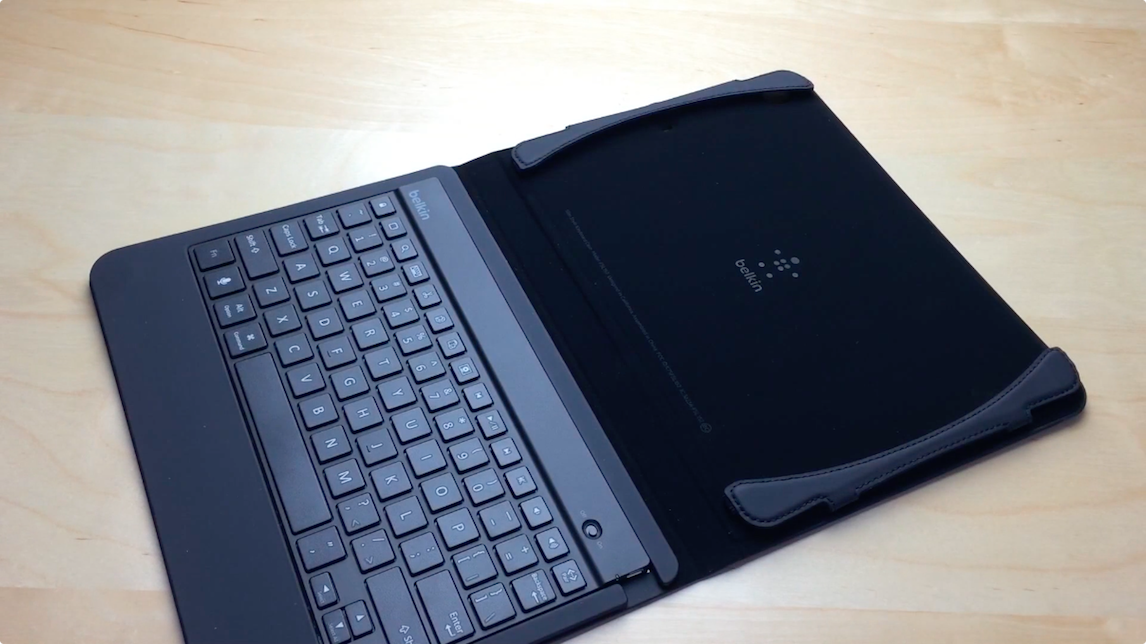 On the opposite side of the case lies a flap that can be used to stand it up using friction. Viewing angles will depend on how you adjust the flap to meet the surface below it. Unlike the Ultimate Keyboard Case, which features three set viewing angles, you can, in theory at least, have many more angles with the Slim Case.

Although slim is a part of this case’s name, it’s really anything but. When combined with the iPad Air, it’s on par with the thickness of my MacBook Air at its thickest point.

The Slim Case adds significantly more heft to the equation, which is to be expected since it features a keyboard and protects the front and rear of the iPad Air. In other words, don’t go into this expecting a miracle when it comes to added size and weight.

Included with either package is a USB charging cable, which connects directly to the case in order to charge the built in battery. The Slim Style Keyboard case can be switched on or off using a manual toggle switch located above the keyboard’s volume keys.

Belkin claims that the Slim Style Case’s battery lasts for 60 hours of use and 60 days of standby time. If you think that sounds good, just wait until I run the battery numbers of the Ultimate Keyboard Case by you.

The Ultimate Keyboard Case is definitely the more “executive” device of the pair. Hence, its looks are much more polished and professional. It has a price, $129.99 on Amazon (pre-order), to match its executive looks as well.

Unlike the Slim Case, the Ultimate Case features a snap in design for holding the iPad Air. This results in a much more seamless merging of the two.

The Ultimate Case is very liberal in its use of magnets. It closes securely with magnets, and its viewing angles, three of them, are all established by strategic magnet placement. 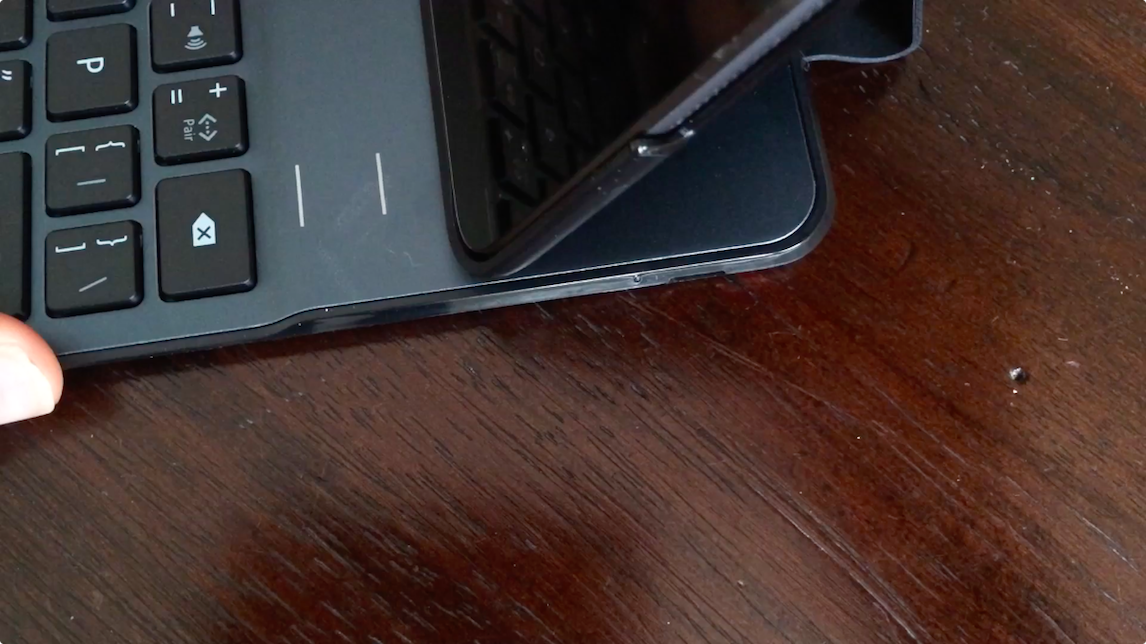 Lacking a dedicated on/off button like its cousin, the Ultimate Keyboard Case takes that worry out of the equation. When you lock the device into one of the three predetermined viewing angles, the keyboard turns on automatically. When you close the case, the power is shut off.

According to Belkin’s documentation, the Ultimate Keyboard Case can last a whopping 6 months on a single charge. This is with an average use of two hours per day. Impressive stuff.

If price is your main concern, then it goes without saying that the $79.99 Slim is quite a bit more reasonable than the $129.99 Ultimate Keyboard Case. The Slim is certainly suitable for every day usage, and it has a keyboard that is arguably superior to the one found in the Ultimate Case. 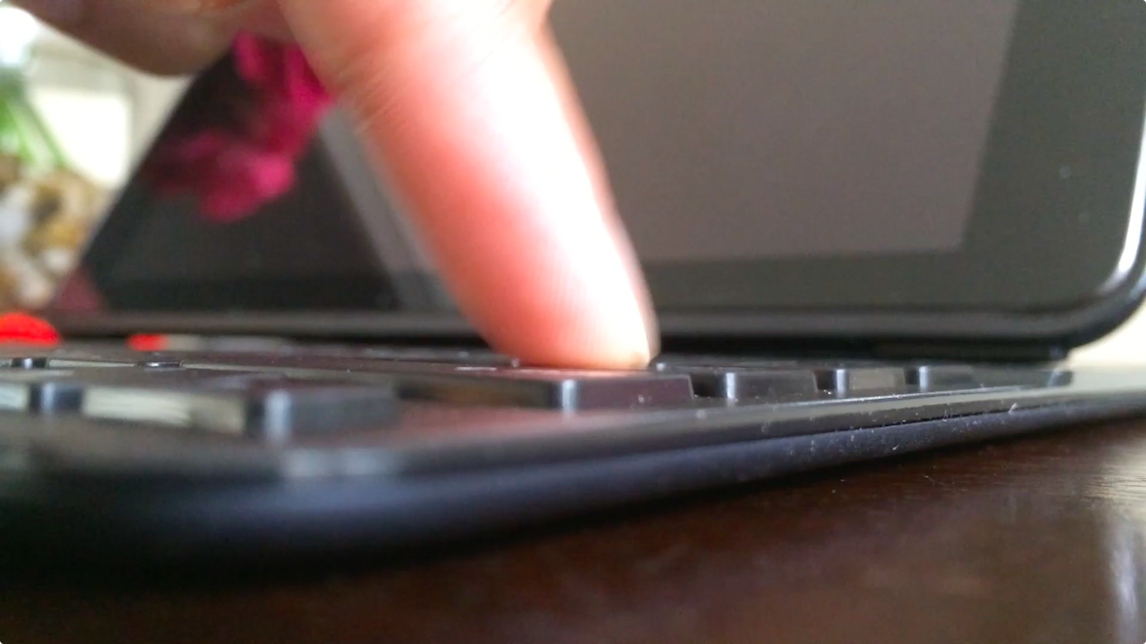 With that said, I still believe that of the two offerings, the Ultimate Keyboard Case is the one to reach for. It’s not a svelte package by any means, but it’s noticeably thinner than the Slim case; it also looks better.

Couple those things with its ridiculous battery life, magnetically dialed-in viewing angles, and secure closure, and it’s easy to see why the Ultimate Keyboard Case is the one that most will prefer.

If you own either case, or are in the process of considering the purchase of a keyboard case for your new iPad Air, share your thoughts and experiences in the comments down below.