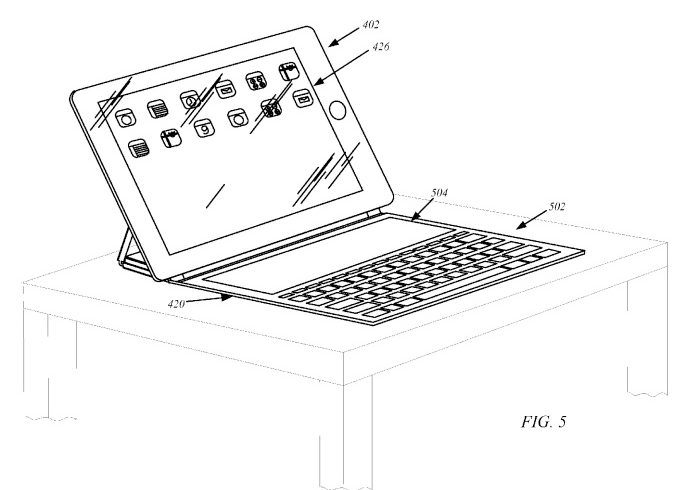 A sketchy video recently asserted Apple’s Smart Cover for iPad has undergone a redesign that may launch Tuesday alongside new iPads. Suspiciously, we’ve seen no credible leak whatsoever to support the thesis. Though Apple’s filed for a number of iPad keyboard cover patents, it’s unclear in what direction it might take the Smart Cover come tomorrow.

If you ask a former Apple engineer, however, the company is seeking to address the success Microsoft has seen with Touch Type covers for the Surface by releasing its own Surface-inspired keyboard case for the new iPads that will incorporate a physical QWERTY keyboard and a bunch of other functions…

Gizmodo UK points us to a blog post by Jamie Ryan who lists Apple Developer Relations as a recent job. Ryan thinks Apple has prototyped a Bluetooth keyboard case for the full-size iPad, speculating the company might unveil the new accessory at tomorrow’s event.

It’s not just keyboards either. I’m told other cover like accessories are also being looked at.

Now I must stress that what was seen were only prototypes and they might never get to see the light of day. Apple regularly mocks up all sorts of accessories and products and ditches them. 1000 no’s for every yes etc.

Speculating further, he thinks a Surface style iPad keyboard case would let the company differentiate the full-size iPad from the iPad mini and position it as more of a pro device.

The company is said to be unhappy with its own standalone Bluetooth keyboard for the iPad as “it’s not quite as integrated as Microsofts offering” and requires “a lot more bag space”.

Apple realises the market for the large iPad is mainly professionals looking to work on it whereas the iPad mini is mainly content consumption.

You’d be hard-pressed to take the report at face value.

On the other hand, Apple’s been researching new Smart Cover technologies for quite some time. First, past Apple job posts have indicated that the company is actively researching solar-powered devices.

Apple’s event kicks off at 10am PST tomorrow and Cody has a nice roundup of what to expect. iDB will be covering the announcements and publishing tidbits throughout the day so make sure to tune in tomorrow.

Would you buy such a case?