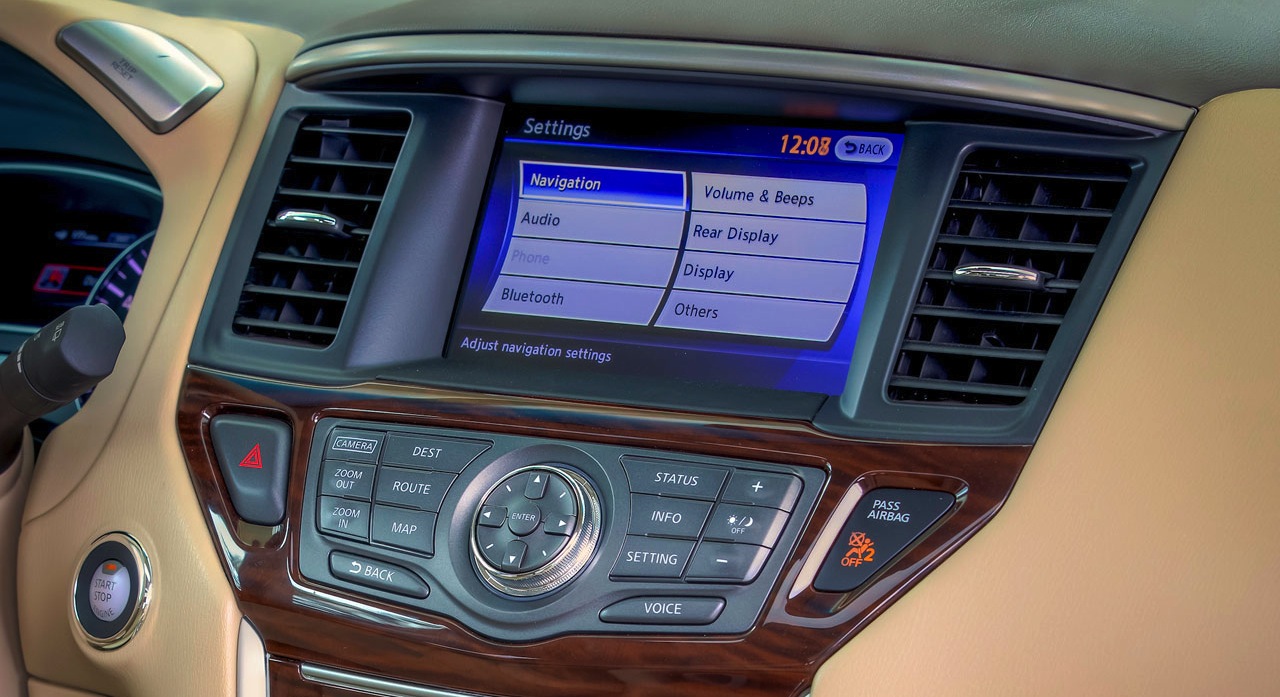 I recently purchased a new top of the line 2013 Nissan Pathfinder and am very pleased with the family decision. Everything is exactly what my wife was looking for in a vehicle, sleek exterior, beautiful interior, mandatory leather seats, and room for future 2.2 kids and a Great Dane. The size, we felt, was a little lacking, but it stood up to its rivals with a bit of finesse.

We get our new, fresh smelling, SUV home and start playing with it in the driveway like two kids and a new toy on Christmas morning. But, we obviously are attracted to different things. My wife wanted to climb all over the back seats, adjust the driver seat, and set the memory locks for her key fob. I go straight for the dashboard entertainment center.

I took a fairly hard look at the infotainment center on our various test drives, but once I had my iPod classic freshly synced and plugged into the Pathfinder, I quickly grew upset. Below the fold is a personal reaction to the system in our new vehicle and a highlight of how things could be done in a more fluid way…

The best way for vehicles to offer full functionality is iPod or iPhone mirroring. As Apple announced at the June WWDC, the car is a “key focus” for the near future. Cook announced that “iOS in the Car” is something customers want and Apple is positioned to help in a unique way.

iOS in the Car seamlessly integrates your iOS device — and the iOS experience — with your in-dash system. If your vehicle is equipped with iOS in the Car, you can connect your iPhone 5 and interact with it using the car’s built-in display and controls or Siri Eyes Free. Now you can easily and safely make phone calls, access your music, send and receive messages, get directions, and more. It’s all designed to let iPhone focus on what you need, so you can focus on the road.

These abilities will be paramount for upcoming vehicles.

Getting back to our new Pathfinder, there are several features I cannot believe are missing. Simple items like artist or song search are completely missing. For example, if we want to listen to ZZ Top, the iPod list must be scrolled completely through to “Z.” There are no shortcuts either. I hope to simply scan through 26 letters, A to Z, but that is not an option. Each and every artist must be scrolled through using a dashboard knob.

Another failing is operability on the actual device. Once the iPod classic is plugged into the USB port, all operating system functionality is killed and a Nissan logo is displayed. All iPod controls must be initiated through the lacking dashboard system.

Moreover, when plugging in my iPhone 5, the functionality is also terrible. Once plugged in, the user cannot navigate to the Music.app, or Pandora.app, Spotify.app, Podcasts.app. The audio app must first be playing, then the iPhone can be plugged into the USB port. Worst of all, once the iPhone is plugged in, no control is offered through the dashboard for these features. However, unlike the iPod classic, some functionality is retained and operated directly through the iPhone.

Piling on, the Bluetooth system is failing. Nissan’s Pathfinder only allows calls via Bluetooth. Despite all of the BT 4.0 advancements, the 2013 Pathfinder still prevents users from wirelessly streaming audio to the infotainment system. Consequently, everything is wired through the USB port inside the center console between the two front seats.

What about the auxiliary jack? Unfortunately, there is no 3.5mm input. If there was a input jack, all of these control problems would be eliminated because the user could simply control the audio from the iOS device. But, just like the Bluetooth oversight, the audio input cable is also left on the design floor.

Preventing similar calamities, vehicle and cell phone manufactures need to inherently work side by side to accomplish this task. This is not to say all vehicles have similar troubles to the 2013 Nissan Pathfinder, but it is clear through my own experience, at the least, Nissan is behind the times.

One obvious and unavoidable road block, pun intended, is smartphone refreshes comes every few months. With new cell phone updates releasing so quickly, combined with users purchasing new phones at two year intervals, our vehicles will need to be future-proofed. A majority of consumers drive their vehicles for an extended period of time, through at least three phone upgrade cycles or about 10 years.

Car manufacturers do refresh their lines on a yearly basis, but most upgraded items are minimally affecting smartphone connectivity. Maybe from 2012 to 2013 the vehicle receives a new fancy pair of LED accents for the headlamps or the hood has a more aggressive angle, but little to no attention is paid to the dashboard system. After doing a little research, Nissan has failed to update this particular system since at least 2008.

Future upgrades to infotainment systems will hopefully occur every year with the new model. If that is too costly or not possible, upcoming vehicle centers should possess the ability to easily upgrade their software to adjust with new smartphone features. If new features are released for the vehicle, create a smartphone app that can download the new firmware to the vehicle console.

It appears Apple is headed in the right direction, but just like cable TV providers, auto manufacturers are slow to adapt to new technologies. That is not to say that many manufactures are behind the times, but in the case of my Nissan Pathfinder, someone clearly fell asleep behind the wheel. Scrolling through artists, songs, and albums one by one is a problem I thought the world solved about five or six years ago. Thanks to Nissan refusing to keep up with the times, my current model vehicle is like a typewriter of yore.

Once Apple pushes the auto industry to update their ways more rapidly, expect a more updated system throughout the whole vehicle lineup. I look forward to having a continually updated infotainment system that keeps pace with my rapidly updating technology. With iOS in the Car, the dashboard system is upgraded as soon as iOS is updated. There will be no need for in-dash firmware upgrades or costly additions. Simply, the iPhone image will appear on a screen in front of the driver, with no reliance on the auto manufacture.

Do you own a current or recent model vehicle that is similarly frustrating? Do you think the auto industry is behind? Meet us in the comments below.