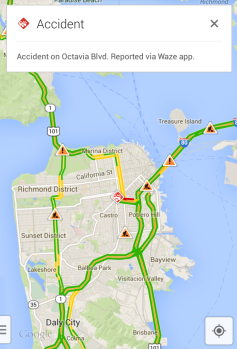 Putting its June acquisition of the popular social mapping and location startup Waze to good use, the Internet giant Google today announced that crowd-sourced incident reports from Wazers will be soon available through the Google Maps mobile apps for iOS and Android.

This means when Wazers report accidents, construction, road closures and more on Waze, their updates will also appear in real-time on the Google Maps mobile apps in Argentina, Brazil, Chile, Colombia, Ecuador, France, Germany, Mexico, Panama, Peru, Switzerland, UK and the US…

“Not only will we continue to outsmart traffic and keep citizens updated via the Waze app and broadcast partners, but Waze real time incident reports will appear on the Google Maps for Android, iPad and iPhone,” the Waze team wrote in a blog post.

Incident reports within Google Maps will not include Wazer profile information, but contributors will still earn points on the Waze side.

And writing on its Lat Long blog, the Google Maps team wrote that the updated Waze Map Editor (below) is now available with support for Google Street View and satellite imagery, making it easy for Wazers to report map errors. 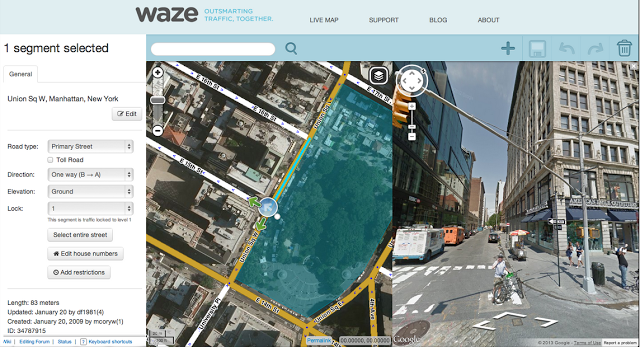 The company has also updated the free Waze app for iOS and Android with built-in Google Search, which joins a host of other search providers featured on Waze, such as Foursquare and Yelp.

Though Apple was speculated to have been interested in Waze, the deal never went through as Google snatched the startup out from under Apple in a surprising move.

Since that hiccup, Apple has moved to snap up public transit and navigation data provider HopStop and location-based data startup Locationary.

In addition, the iPhone maker recently advertised a number of Maps-related positions on its website. Eagled-eyed readers could also note Apple is set to release a standalone Maps Mac app as part of its upcoming Fall release of OS X Mavericks.