Do you remember Samsung before the Apple crusade? Far from being an also-ran, Samsung back in 2010 started doubling-down on the Galaxy brand message, signaling intention to establish itself as the smartphone maker to watch. But it wasn’t until the South Korean conglomerate began airing its first television commercial which ridiculed iPhone owners that it started positioning itself as the anti-Apple.

And the message resonated with the demographics outside the Apple fold. In doing so, Samsung has earned itself lots of free press and attracted a following comprised of bloggers, media outlets and customers who for whatever reason couldn’t stand Apple, its culture and products.

We already know the anti-iPhone ads are working and now a Samsung executives acknowledges that the anti-Apple campaign has been a “tipping point” for the Samsung brand. Which probably means those ad attacks will only intensify going forward…

That really did mark quite a tipping point for us globally. We were able to tell a cheeky story – if you think about it, we’re a Korean company starting to really mess with the order of things.

Here’s an example Samsung ad that picks on Apple loyalists.

And another one suggesting the iPhone is for old people.

That one certainly struck a nerve.

And this one’s from yesterday:

Needles to say, Samsung intends to milk those ads for all their worth.

You’ve got fanboys after fanboys going, ‘You can’t put that out there’, and then the Samsung fans saying, ‘Yes, you can’, and they’re starting to have that conversation, which is brilliant. So that piece of content has been amazing for us, both globally and here in Australia.

It is my take that Apple’s advertising, with a few notable exceptions, is no longer memorable nor does it strike a chord with mainstream consumers. Worse, as Samsung is amping up its advertising a couple of notches, Apple appears to be largely on the defensive.

Samsung’s ads are damaging Apple’s reputation, while tarnishing its brand and painting a picture of the once dominant player that has lost its way. And what’s Apple doing in the meantime? 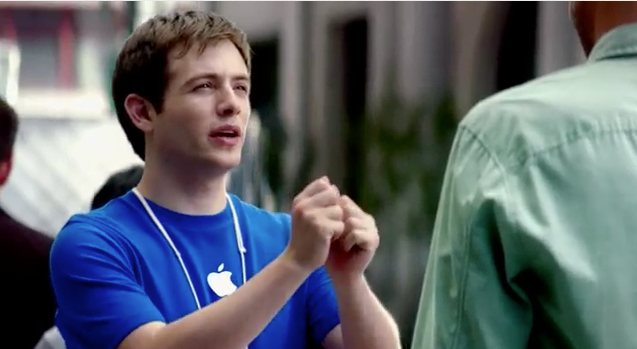 There’s no denying that Apple’s ad department since Steve Jobs’s passing has been experimenting with a bunch of different creative concepts, to little avail – Apple’s ads created over the past two years evidently lack a concise theme to them.

Don’t get me wrong – I’m a big sucker for great advertising and have always maintained that Apple is the world’s greatest marketing machine, but that’s changed under Tim Cook’s watch.

What do you think, is Apple’s advertising slipping?

Should the company get back to its roots of coming up with original, funny and memorable ads?