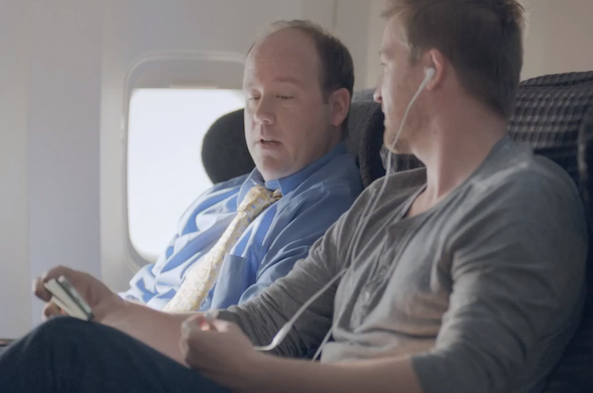 Samsung has posted a new Galaxy S4 TV spot to its YouTube channel this afternoon. The ad, titled ‘Ready for Takeoff,’ follows the company’s recent advertising trend, depicting a man using his S4 in public that eventually gets surrounded by interested onlookers.

This particular ad seems to target iPhone users more than Samsung’s previous commercials, though, as it co-stars an iPhone owner who seems very interested in the S4, but says he likes a “simple phone” and worries about the complications of switching. Watch…

And here’s the accompanying marketing text:

The video comes at an interesting time, as Apple is gearing up for a busy fall. The company is widely expected to release a new version of its iPhone, as well as an all-new budget version of the handset, in addition to other new products sometime in the next few months.

Samsung unveiled the Galaxy S4 in March of this year to modest praise. While it’s widely considered to be one of the top Android phones available, many have lambasted it for its gimmicky features and bloatware. And reports on its sales success have been conflicting.

Anyway, what do you think of the new ad? Will it be able to convince wavering iPhone users to switch?