It seems like it’s ‘pick on AT&T week,’ because shortly after a report surfaced that Verizon was running an ad in The Wall Street Journal calling the carrier out for its ‘most reliable network’ claims, comes word that T-Mobile is going to run a similar print spot.

In a new print ad, set to run in today’s issue of USA Today, T-Mobile bashes AT&T’s Next program, calling it ‘sneaky and ‘underhanded.’ The copy also quotes a Verge article, saying “AT&T’s reaction to T-Mobile’s transparency is to be more deceptive than ever.”

Here’s the ad posted by AllThingsD: 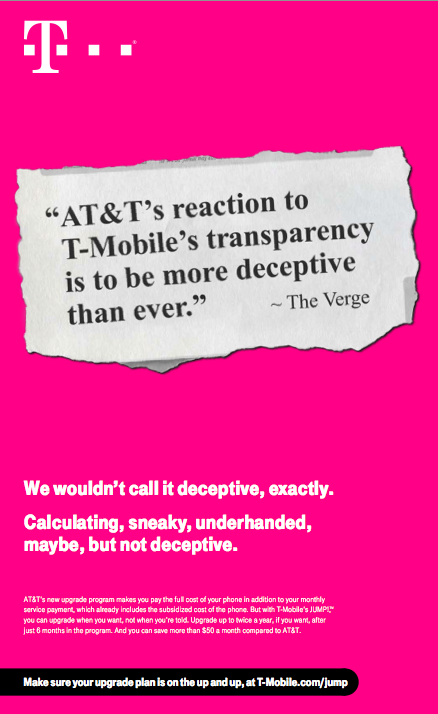 To be fair, T-Mobile’s argument that customers aren’t benefitting from AT&T Next isn’t unfounded. In our comparison of the three upgrade programs, we found that the Next plan would likely end up being a bad deal for most customers. And Consumer Reports agrees.

The problem is that while T-Mobile lowered its rate plan fees by separating equipment costs and service charges, AT&T is simply tacking on a monthly equipment fee to its rate plans which already include subsidy charges. So essentially users pay for their devices twice.

Here’s T-Mobile USA’s CEO John Legere voicing his disdain for AT&T (which he often does on Twitter):

So painful to watch @ATT try to keep up. #JUMP is a revolution. @ATT Next is bait. #TMobile leading customer revolution!

I love the fact that T-Mobile is calling AT&T out for trying to pull one over on its customers. And AllThingsD says that follow-up ads are set to run on Wednesday in other major papers, which also take aim at Verizon. It’ll be interesting to see how they both respond.