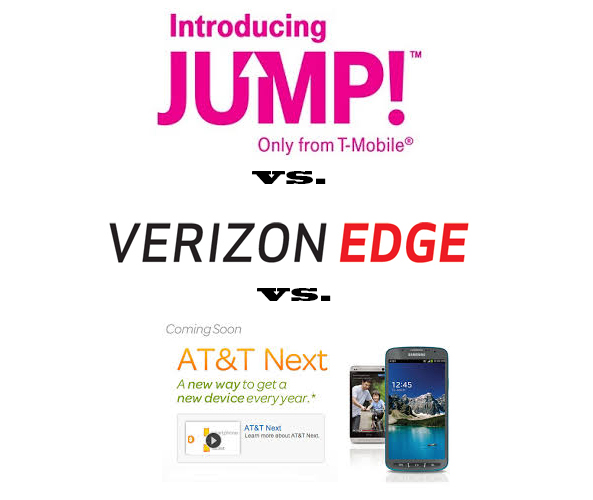 Last week, T-Mobile unveiled ‘Jump,’ an ambitious new upgrade program that allows subscribers to pay $10 per month for the chance to upgrade their devices more frequently. At the time this hadn’t really been heard of, as most carriers were on a 2-year upgrade model.

But that changed almost immediately after T-Mobile’s Jump event. Just a few days later, AT&T introduced its Next device upgrade program, and this morning, Verizon made its Edge offering official. So what’s the difference between all of these options? Let’s take a look…

We’ve already done the math on AT&T’s Next plan, and it’s not that great of a deal. Monthly payments equal to 1/20 of the device’s retail cost, on top of rate plans with built-in subsidy charges, means you’ll pay almost full retail for a device in 12 months and not get to keep it.

Verizon’s new Edge program works in a similar fashion, but the device’s retail cost is spread over 24 months. So you’ll pay about $28.08 per month for an iPhone 5, again in addition to roughly $20 of built-in subsidy charges, and you have to trade it in at the 6 month mark.

Confused? Here, the folks over at MacRumors put together this great chart to help explain it. It breaks down the different device upgrade plans for AT&T, Verizon and T-Mobile based on what device payments would be for a 16 GB iPhone 5 owner upgrading after 12 months.

As you can see, T-Mobile comes out substantially cheaper—over $100 cheaper than AT&T. This is due to the fact that it has completely decoupled handset purchases from service charges. By not including built-in subsidies in its rate plans, it makes them far less expensive.

So which one should you go with? Casual customers will likely see any one of these offers as an economical way to upgrade more frequently. But those who run the numbers will see you’re better off paying full retail for a device and selling it yourself when you’re ready to move on.