So, both AT&T and Verizon are now making you wait longer to upgrade to a brand spanking new smartphone, going from 20 to 24 months?

That’s exactly where T-Mobile is hoping to leapfrog the nation’s leading telcos with its new upgrade initiative called Jump.

As reported earlier today, Jump basically lets you upgrade when you want, not when you’re told (“two years is too tong to wait” to upgrade your phone”).

More precisely, you can upgrade up to twice a year as soon as six months from enrollment. So welcome to the Jump upgrade club my friend and don’t forget to jump past the fold (pun intended) for the full breakdown…

At some point, big wireless companies made a decision for you that you should have to wait two years to get a new phone for a fair price. That’s 730 days of waiting. 730 days of watching new phones come out that you can’t have. Or having to live with a cracked screen or an outdated camera.

We say two years is just too long to wait. Today, we’re changing all that with the launch of Jump! Now, customers never have to worry about being stuck with the wrong phone. And, yes – it’s really as good as it sounds.

On to the fine print.

For starters, membership in the Jump club will set you back ten bucks per month, per phone (plus taxes and fees). “That’s just $2 more than most customers have been paying for handset protection alone,” the firm remarked.

Jump phone upgrades are financed through T-Mobile’s Equipment Installment Program (EIP), twice every twelve months after you’ve been in the program for at least six months. You’ll be able to purchase Jump when you add Services to your order. 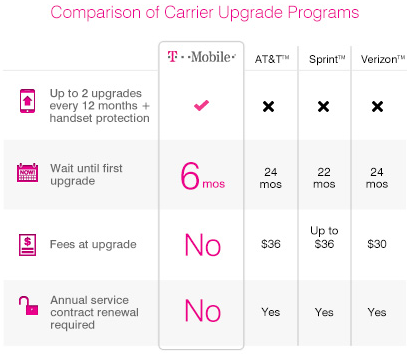 One comparison chart to rule them all

Upgrading your device couldn’t be easier: simply waltz inside a participating store come this Sunday and trade in an eligible T-Mobile phone, which has to be in good working condition, at which point the telco will eliminate any remaining EIP payments.

They created a few nice ads to push Jump into the public’s consciousness.

And my favorite, titled ‘Urinal’.

Last but not the least, the Deutsche Telekom-owned company launched a new family plan, available from July 14, which sells four phone lines with unlimited talk/text/web with up to 500MB of LTE data in exchange for $100 per month, with no credit check or annual service contract requirement.

It wouldn’t be a T-Mobile presser without some NSFW language. For instance, this is how Legere forecast smartphone sales for 2014: “We’re going to sell a shitload more”.