When Verizon makes a major plan or policy change, AT&T is typically right behind it. And vice versa. It happened with share everything plans, and the phasing out of unlimited data. There’s like an unwritten rule or something.

So it shouldn’t come as much of a surprise that just two months after Verizon took away its 20-month upgrades, AT&T has followed suit. Folks on two-year contracts will now have to wait the full 24 months before upgrading…

Engadget just received what looks to be an internal AT&T memo that discusses the policy change. The new policy starts today and it affects new customers and existing customers whose contract expires after March 1, 2014. 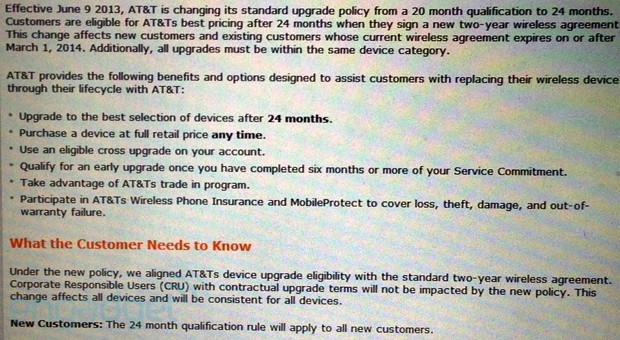 Previously, AT&T customers on two-year contracts, with accounts in good standings, would be allowed to purchase a new phone at the subsidized price every 20 months. But it looks like that’s over, and it’s a full two years now.

Unless, of course, you meet certain criteria. Fortunately, AT&T isn’t taking away the ability to qualify for an early upgrade. And you can still trade-in your old phone toward the purchase of a new one, depending on its condition.

There’s no explanation given for why AT&T has decided to change its upgrade policy, but I’m not sure that we need one. It seems pretty clear that this is where most major US carriers are headed, outside of maybe T-Mobile USA.

It’s just a shame that it had to happen now, a few months before Apple is expected to unveil its new iPhone.

Mad? Us too. Feel free to join us down in the comments below to talk about it.