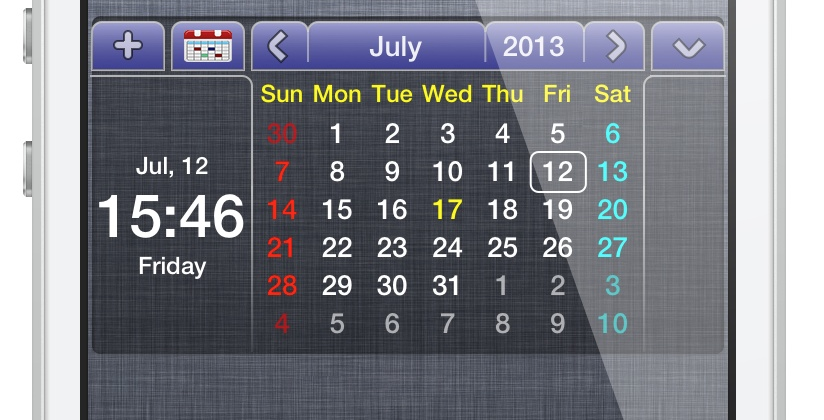 CalendarX is a recently released jailbreak tweak that serves as a widget for Notification Center. It’s a very interesting tweak that can be enabled by using the standard Notifications panel in the stock Settings app. The thing that makes CalendarX so unique is that it is a standalone self contained calendar app that doesn’t rely on any outside functionality. In fact, none of the calendars or events that you setup within CalendarX will be displayed in the stock Calendar app or vice versa. Again, think standalone here. Depending on your outlook, that could be perceived as either a positive or a negative. Have a look past the break as I go more in-depth with CalendarX on video.

The main downfall of CalendarX is without a doubt its looks. Sporting an archaic design that was universally panned in our YouTube video’s comments, looks are the most obvious downside of the tweak. If you can get past the design, then there might be hope that you can enjoy some of the features that CalendarX has to offer.

The calendar found within CalendarX can be easily switched to any year, month, or day. Users can add custom events to any particular day by tapping the ‘+’ button. The tweak features a variety of in-depth event details such as title, date, location, and even an special icon representing the type of event that you’d like to add. As I mentioned earlier, none of the events that you add will show up in the stock iOS calendar.

Needless to say, CalendarX is an extremely niche tweak that not everyone will appreciate or enjoy. With that being said, I have to admire the developer’s commitment to developing a tweak that’s completely self contained. An obvious amount of work went into the development of CalendarX, but the sad part is that it probably won’t pay off. In the end CalendarX is just way too polarizing for the masses, and if that wasn’t enough, its price point will ward off all but the most curious customers. At $2.99 on Cydia’s BigBoss repo, CalendarX is anything but an impulse purchase, and for that reason, its chance for success is slim to none.

What do you think about CalendarX? Share your thoughts, suggestions, and comments down below.