In what could only be described as a one-two punch to Samsung of South Korea, Apple’s iPad has now been named the top tablet in the country’s National Customer Satisfaction Index. Just yesterday, you’ll remember, the iPhone beat Samsung in Quality Insights customer satisfaction rankings in the Galaxy maker’s home territory.

The National Customer Satisfaction Index by the South Korean Ministry of Knowledge Economy gave the Apple tablet the #1 ranking for the third consecutive year since the program’s inception in 2010, praising the ecosystem of apps tailored specifically for the iPad, along with an “excellent touch user experience”…

As reported by the Korean website BetaNews, the iPad’s 2013 ranking improved by 1.4 points, beating Samsung, LG and other Korean companies.

The tablet’s build quality, the unmatched touch experience, apps, the introduction of a cheaper iPad mini and the Apple brand were all cited as helping it achieve 74 percent satisfaction.

The wide variety of apps exclusively catering to iPad users as well as the superior quality and smooth operability of iPads account for Apple’s success with this year’s NCSI Survey.

In 2010 and 2011 the iPad was tied for the top slot with Samsung’s Galaxy tablet, but this year took the #1 spot for itself for the first time ever. Back in the United States, Apple’s tablet won JD Power’s satisfaction scores for the second time in a row. 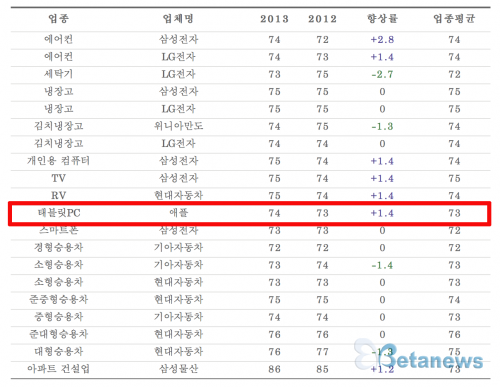 It should be noted, however, that the survey is based on a much smaller sample of 278 people versus the 40,000 sample in the case of the iPhone.

Apple’s boss Tim Cook during the WWDC keynote said that of the 900,000 apps in the App Store, 375,000 were designed specifically for the iPad. He also repeatedly referred to customer satisfaction as ‘customer sat’.

The use of jargon talk prompted Apple pundit John Gruber to note that Cook, who is a numbers guy, is “most obsessed with the right kind of numbers, those that attempt to quantify how happy Apple’s customers are”.