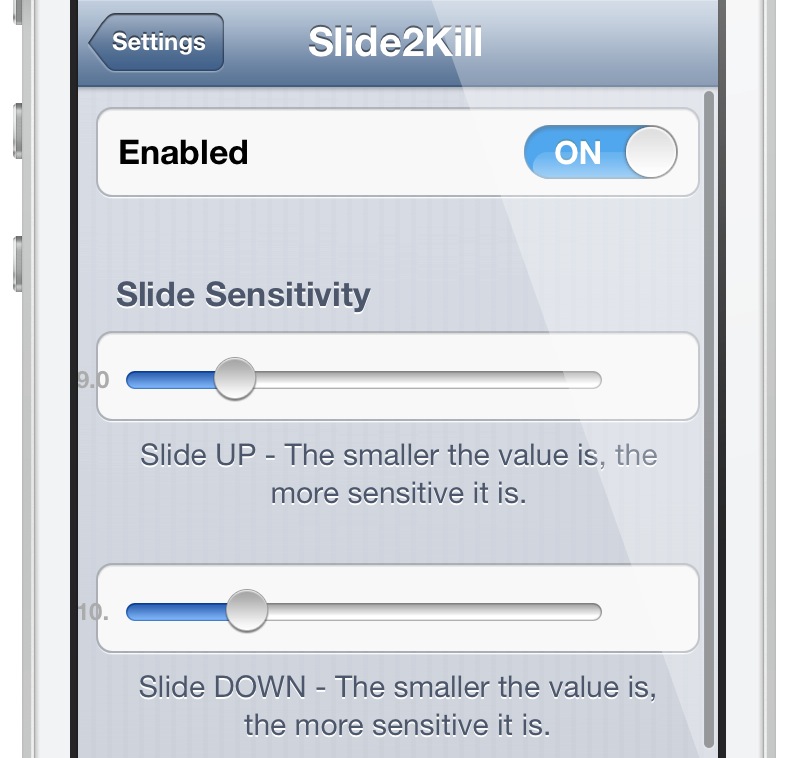 Slide2Kill Pro is a recently released tweak that allows you to perform swipe gestures on the apps running in the app switcher. Slide2Kill serves as a way to remove apps from the app switcher in one fluid motion, instead of the stock iOS method of tapping and holding to enable wiggle mode, etc.

Obviously, iOS 7 will eliminate the need for tweaks like this, but until it goes public, Slide2Kill Pro is a decent alternative to the stock method of killing apps. Check out our brief video demonstration after the break…

From what I can gather, the primary difference between the original Slide2Kill, and Slide2Kill Pro, is the latter’s omission of advertisements in its preferences. The developer also claims that the pro version features under the hood refinements and a smoother “slide experience”, though most will probably be okay with the free version.

Slide2Kill features a sensitivity option in its preferences for the swipe up/down gestures along with a handy kill switch for disabling the tweak. You may also configure different actions to the swipe up, swipe down, and long press settings from within the tweak’s preferences.

If you’ve been looking for a faster way to manage running apps in the iOS app switcher, then Slide2Kill or Slide2Kill Pro are worth checking out. You can find either version on Cydia’s BigBoss repo. Again, the pro version is $0.99. Let me know what you think about the tweak in the comments below.