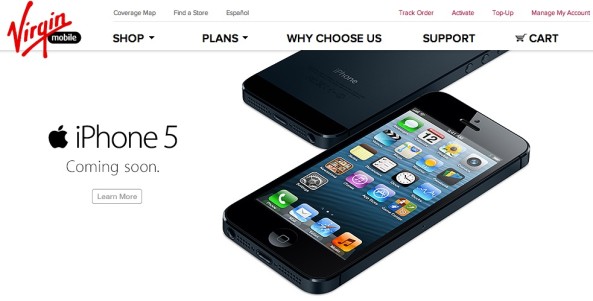 We’ve been hearing for a while now that the iPhone 5, Apple’s flagship handset, was on its way to popular Prepaid carrier Virgin Mobile. Last week a report claimed that the device would launch this Friday, and today comes further confirmation of that.

9to5Mac is reporting that it has learned from a reliable source that retail giant Radio Shack will begin offering Virgin Mobile-flavored iPhone 5 models tomorrow. They’ll come in both black and white, and start at $499  with the trade-in of a compatible device…

9to5Mac’s Jordan Kahn has the scoop:

“We reported last week that the iPhone 5 would be coming to Virgin Mobile tomorrow starting at $549.99 on its usual no contract $30/month unlimited plans. We’ve just received word from a reliable source that RadioShack will be one of the first to carry the device and is also planning to offer a number of promotional discounts to celebrate the launch.”

Those discounts don’t just include the iPhone 5 either. Radio Shack is offering the same $50 trade-in deal for the iPhone 4 and 4S, slashing prices on those two devices to $299.99 and $399.99. All work with Virgin’s no-contract plans that start at $35 per month.

Apple continues to make inroads, however slow, with US prepaid carriers, but it’s still struggling with them on a global scale. The company’s current handsets still run between $400 and $600 (full retail) and are being undercut by far less expensive Android devices.

Word has it that it’s looking to change that though, by launching a ‘budget iPhone’ this fall alongside a new flagship smartphone. The rumor mill paints a picture of a device that is made of both metal and plastic, with similar features to the iPhone 5, and a price tag around $300.

But folks looking to score an iPhone now should check out their local Radio Shacks this weekend. If you’re not in need of a prepaid plan, 3 of the 4 major US carriers are holding huge sales on the iPhone 5 right now. AT&T, for example, is offering the 16GB model for just $99.