It’s widely believed an unknown portion of iPad mini production is being handled by Foxconn’s recently built manufacturing facilities in Brazil. It’s remarkable then that the iPad mini is still unavailable in the country. The situation is finally set to take a turn for the better as the iPad mini is slated to arrive in Brazil next Tuesday, June 25. As you know, Apple launched the iPad mini in the United States and several other key markets eight months ago, in October 2012…

MacWorld Brasil points at teaser images published by local distributors FNAC and Saraiva announcing June 25 availability. Prices haven’t been advertised by either store, but make no mistake about it – the device is going to be significantly pricier than the $329 entry-level asking price over in the United States.

FNAC would only say the prices will be revealed on June 25, confirming it will start accepting online orders through its website at 8am local time. 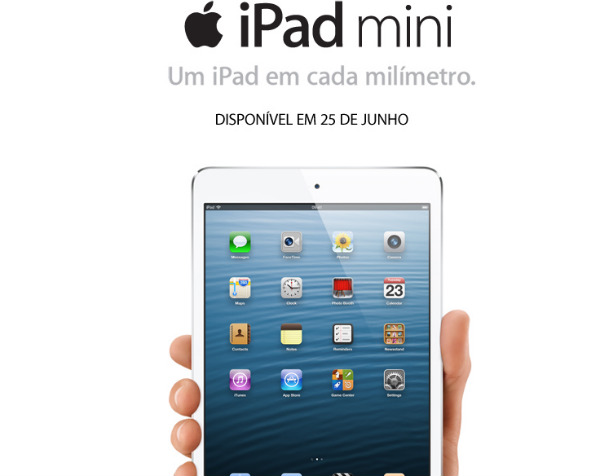 Brazil is home to the nearly 200 million people and one of the emerging markets along with Russia, India and China where Apple’s products are out of average folks’s reach. In the case of Brazil, this is mostly due to local regulations and high import taxes.

It’s also interesting that Apple ran into trouble with the Brazilian patent system and a local Android handset maker over the iPhone moniker.

After losing the valuable trademark in the country – and following a long legal spat – the two sides dropped the lawsuit in favor of a “pacific” agreement said to include a cash payment from Apple, per Brazil’s largest daily newspaper.