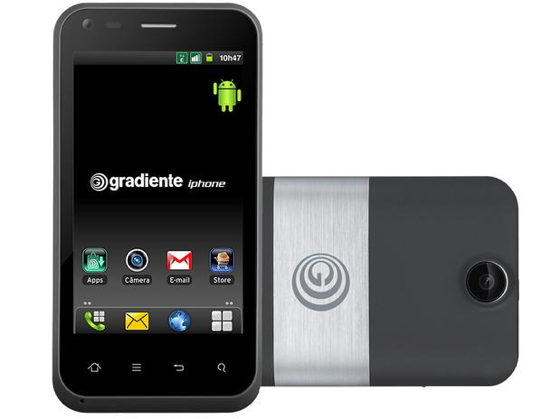 Earlier this month came a rumor that Apple was in jeopardy of losing its ‘iPhone’ trademark in Brazil to the local electronics maker IGB Eletrônica SA, which applied for exclusive rights to the name back in 2000, winning the rights to the moniker. In 2007, Apple asked the Brazilian Institute for Industrial Property (INPI) to make iPhone its exclusive trademark, but a report lats week suggested the request won’t pass muster. Today, Brazilian regulators have ruled that Apple does not have exclusive rights to use the “iPhone” trademark in the country…

BBC has the story:

The decision is the result of a local company, Gradiente Eletronica, registering the name in 2000, seven years before the US firm.

But the Institute of Industrial Property told the BBC it understood Apple was pursuing an appeal.

This is a major blow.

Of all companies, Apple loses the precious iPhone maker to a Brazilian Android maker.

Gradiente, an IGB brand, has been selling its G-Gradiente ‘iPhone’ since 2000, seen top of post.

The INPI’s decision only applies to handsets so Apple still has exclusive rights to use the iPhone name elsewhere in the country, including on clothing, in software and across publications.

While Apple can continue to sell the iPhone in Brazil, it now risks Gradiente suing it for exclusivity though Apple could be looking to acquiring the moniker from Gradiente just like it did with the iPad moniker in China.