Move over Twitter and Facebook, it looks like Apple is planning to add a third social network to the system-wide share sheet in iOS 7. According to code-based references found inside the first beta, the company is testing deep LinkedIn integration.

Similar to the setup with the two aforementioned networks, the code points to a single-sign-on system for LinkedIn accounts. This would allow users to easily post content, such as Web URLs, to LinkedIn from native and third party applications…

9to5Mac points to the discovery, which was made by Hamza Sood (who recently discovered hidden settings in iOS 7). The site says that certain pieces of the code are missing that would allow the LinkedIn functionality to become active for beta users. 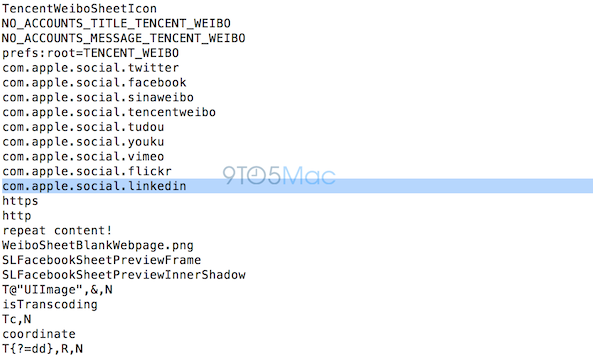 With that being said, it’s currently unknown what Apple’s plans are for the added LinkedIn functionality. As 9to5 notes, Apple tested versions of iOS 4 that included Facebook integration, but the feature was not included in the actual public release.

As it stands now, iOS 7 features a wide array of third party service support. Users can natively upload media to Twitter, Facebook, Flickr and Vimeo. So it’s not hard to imagine them adding LinkedIn support as well (business users would love it).

In fact, Apple has already added native LinkedIn sharing to its new desktop OS, OS X Mavericks. So you would think that adding it to iOS 7 would be a no brainer. Then again, it could get scrubbed for more important features, and added in a future update.

Honestly, I wouldn’t care either way. What about you?