If you’ve ever used Facebook integration in iOS 6, you may have noticed iOS lets you grant the Contact app access your Facebook account in Settings > Facebook. Enabling this feature creates a new ‘Facebook’ group in Contacts which contains entries for all of the people you’re friends with on Facebook. According to a thread over at Apple’s support forums, a number of people are experiencing an issue where some of the entries are dissapearing from the Facebook group in iOS Contacts.

If you have noticed similar symptoms, don’t panic – it’s a feature rather than a bug…

Jordan Kahn of 9to5Mac reached over to Facebook and was told it’s part of the social networking giant’s decluttering effort which was designed to remove “phone book entries that were not useful.”

In Facebook’s parlance, a useless contact item is one without any contact information on Facebook other than a @facebook.com email address (seriously, who’s using these anyway?).

In other words, Facebook is trying to remove some of the spam from your iOS Contacts app by no longer syncing friends that have no useful contact information.

According to a Facebook spokesperson, friends that have no contact information on their profile other than a @facebook.com email address will not be synced to the Contacts address book going forward.

I regularly sync my Facebook and Twitter contacts with my iOS devices and these useless entries with no information apart from first and last name have been driving me crazy. 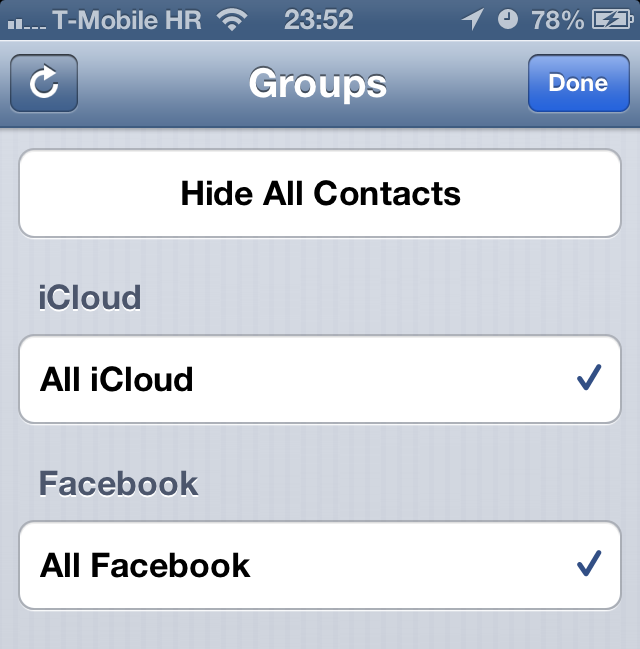 Rather than replace your existing contacts on the device, Facebook sync creates a new ‘Facebook’ group in the Contacts app. It’s a one-way sync: when your friends update their email address or phone number on Facebook, those changes will be reflected in your Contacts.

Needles to say, updating an entry for a Facebook friend in Contacts doesn’t update their information on Facebook.

Keep in mind that the Contacts app defaults to showing all your contacts gathered from a bunch of sources in a single view. To browse just your Facebook contacts on the device, hit the Groups button in the upper-left of the Contacts app and choose Facebook.

iOS 6 can also update your existing contacts with their Facebook profile names and photos: go to Settings > Facebook, scroll down to the bottom and hit the ‘Update All Contacts’ button.

Just out of curiousty: are you taking advantage of built-in Facebook contacts sync in iOS 6?