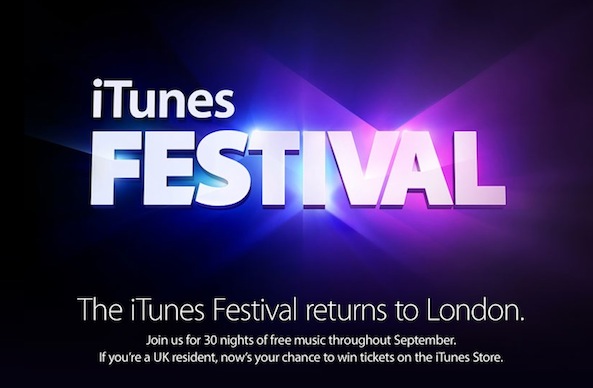 Apple has tonight announced details for its upcoming iTunes Festival, an annual music festival it’s sponsored for the last 5 years. This year’s event, like last year’s, will be taking place at London’s historic Roundhouse venue throughout the month of September.

Head of Internet Software and Services Eddy Cue says that the Festival will be the “best ever,” with a star-studded lineup of over 60 acts. Global superstars like Justin Timberlake and Thirty Seconds to Mars are scheduled to perform during the 30-day event…

“Apple today announced that global superstars including Justin Timberlake, Thirty Seconds to Mars, Jack Johnson and Jessie J are among the headliners at this year’s iTunes® Festival in London. Running every night in September at the Roundhouse, the iTunes Festival features over 60 acts performing at the legendary venue […]

“This year’s iTunes Festival is the best ever with an incredible lineup of global superstars and stellar emerging artists,” said Eddy Cue, Apple’s senior vice president of Internet Software and Services. “Music fans around the world are going to love watching this incredible month of music, whether in London at the Roundhouse or on their iOS device. We’re honored so many renowned artists are part of this year’s lineup.”

Like last year, users will be able to watch all of the performances either live or on-demand via their iPhone, iPad or iPod touch. Apple will also be streaming the Festival to Apple TV set top boxes, and will likely offer digital EPs on iTunes from many of the shows.

If you’re interested in actually attending the Festival, tickets will be available via an iTunes lottery or through competitions held by various media partners. Apple says that folks in the US, Australia, Brazil, Canada, Europe, Japan, UK and Mexico are eligible to win.