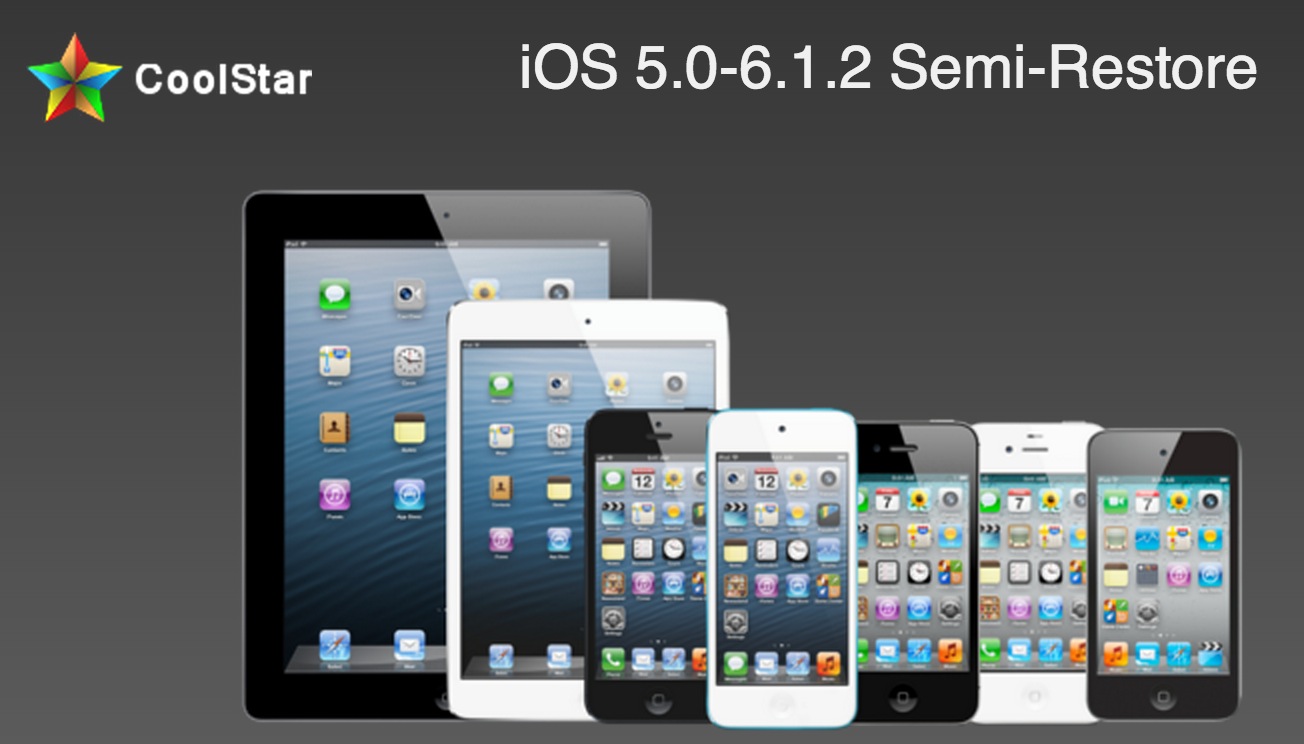 Recently there has been a pretty big buzz about an upcoming release dubbed SemiRestore. We posted about it a few days ago. It’s not out yet, you can check its progress here, but I wanted to use this post to prove to you that it does indeed work as described.

As you know, Apple stopped signing iOS 6.1.2 after iOS 6.1.3 was released. iOS 6.1.2 was the last firmware susceptible to the evasi0n jailbreak, so it’s a precious firmware in the eyes of those who like to tinker with their phones. From Apple’s standpoint, it’s obvious why they opted to fix the exploits used to make evasi0n function. Apple owes it to its users to ensure that iOS is the most secure platform that it can be. Nonetheless, that doesn’t make the jailbreak community any less disappointed at the loss of an untethered jailbreak

To make matters even more grim, Apple has rendered downgrading virtually impossible, and that includes simply restoring your iOS 6.1.2 firmware back to iOS 6.1.2. So what if your iPhone or iPad starts running really slow? What if you genuinely needed to restore your device? If so, then kiss your jailbreak goodbye. That pretty much sums up the predicament that we find ourselves in. For that reason we’re always extra careful not to install any tweaks or apps on our devices that might cause problems.

And that, folks, is where SemiRestore has come in to save the day. I was a bit skeptical at first, but I’ve tested it out myself, and I can assure you that it works pretty well. It’s not a genuine full restore — hence its name — but it’s probably the next best thing to a legitimate restore, and will help you regain the stock feeling of a fresh installation of iOS. The best thing about it? You won’t need to upgrade your firmware, and because of this, you won’t lose your jailbreak. Full demonstration inside.

How to perform a SemiRestore

Again, SemiRestore is not available just yet, but when it is, you will be able to follow this tutorial to SemiRestore your device. I’ve created this as proof that it does work.

Step 1: Download SemiRestore (once released) to your downloads folder

Step 4: cd to your downloads folder

Step 5: Run the following command to transfer SemiRestore to your device:

Note: you will need to replace ‘SemiRestore-beta5’ with the final file name of the SemiRestore package. You will also need to change the IP address to the Wi-Fi IP address of your device. The password is alpine, unless you’ve changed it.

Step 7: Navigate to the /var/root directory on your device. There you should see the SemiRestore file. You may perform a ‘ls’ command to list the contents of a given directory

Step 10: You should now see a bunch of prompts on your terminal window, it should look something like this: 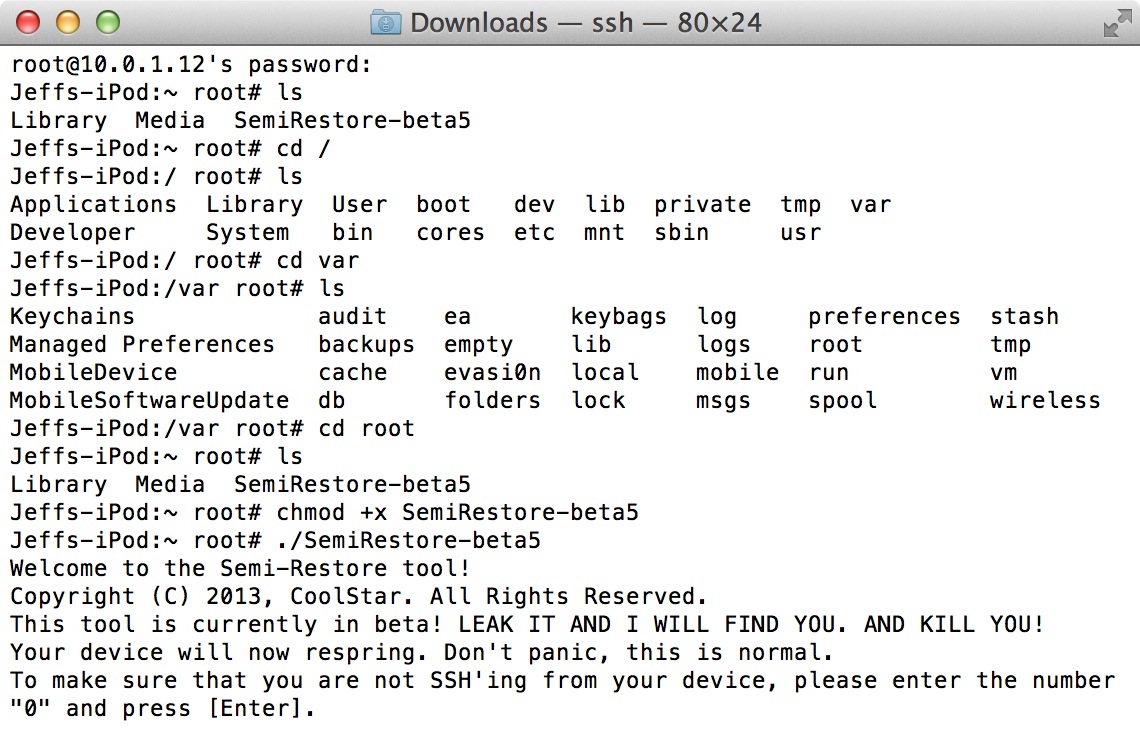 Step 11: You will be prompted to type a ‘0’ followed by Enter. Do this, and the SemiRestore will officially begin

Notes: As stated on the terminal window, patience is a necessity here. If you have a lot of information on your device, it could take a while for the SemiRestore to complete. It’s going to depend on how much information that you have on your device. Just be patient, and be sure to watch the video above so that you have a good idea as to what to expect from the process. Your device will reboot several times. Do not start the setup assistant until the SemiRestore has fully completed. Again, look at the video for a good idea of what to expect.

All in all, I was pleasantly surprised with my experience with SemiRestore. I was highly skeptical at first, but I’ve done it twice on my device, and it worked both times. One thing that I should mention is that my terminal window hung up a few times, but it didn’t impede the SemiRestore at all.

SemiRestore removes pretty much everything from your device, so proceed with caution. It removes jailbreak tweaks, App Store apps, files, photos, notes, reminders, settings, music, and any other personal data. Just go into it expecting it to remove everything. You need to backup your device and save off any important stuff before you begin. True, it’s not a full restore, but it’s the closest thing to a full restore, and should therefore be treated with respect.

After the SemiRestore was completed I was left with a stock looking iPod touch. Literally, everything was reset back to defaults. It’s almost as if I’d completely restored it using iTunes. The big difference with SemiRestore is that I was able to maintain my iOS 6.1.2 firmware, Cydia was still there, and so was iFile. Other than that, everything seemed to have been restored back to stock.

One word of warning. If you need to restore your device for some reason, I mean perform a real restore that’s guaranteed to remove any data, then you want to do the real thing. Otherwise, you run the risk of maintaining some of that data on the device.

SemiRestore is a legitimate way to gain back some of the stock form on your jailbroken iOS device. No, it’s not a true restore, but there’s nothing that will get you closer to stock than this. Yes, there is always some risk when you go poking around your iOS device, but in the times I used SemiRestore, it worked pretty much flawlessly. I wouldn’t go around restoring my device every time I felt it was slowing down, but this is a great tool for those in dire need of a restore, but don’t want to be forced to upgrade their firmware and lose out on a precious jailbreak. Again, there is no current ETA, but there are evasi0n inspired progress bars available on semirestore.tk, the official website for SemiRestore. Special thanks to @coolstarorg, the developer of SemiRestore for hooking us up with an early beta copy.

What do you think? Would you consider using SemiRestore on your iOS device?