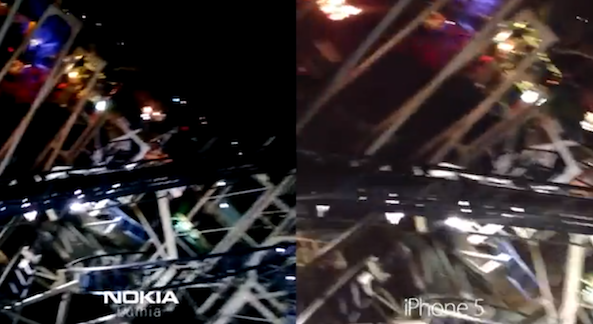 Nokia has yet to find an answer to the iPhone or Samsung’s Galaxy line, but it’s hoping it’s getting closer. The Finnish phone-maker is expected to release a new flagship handset, the Lumia 928, within the next few months featuring its patented PureView technology.

Adding to the speculation, Nokia posted a new video yesterday on the Lumia’s landing page of video shot with the 928’s PureView camera, and compared with footage taken with the iPhone 5 and the Galaxy SIII. And I’ll give you one guess who comes out on top…

The results in the clip clearly favor the 928, with colors in its footage appearing sharper and more saturated than that of the 5 and Galaxy SIII. It’s hard, though, not to be reminded that Nokia has admitted in the past to faking PureView video footage in a Lumia 920 ad.

Also something to keep in mind is that Nokia is testing its yet-to-be-released handset against year-old hardware. Samsung has already unveiled its next-generation flagship smartphone, the Galaxy S4, and Apple is expected to introduce the iPhone 5S in the next few months.

Speaking of the 5S, one of the most consistent rumors regarding the device is that it’s going to have an updated camera. We’ve heard the sensor could be as large as 13MP, and it could be accompanied by an all-new LED flash system. But obviously it’s all hearsay at this point.

Anyway, what do you think of Nokia’s PureView comparison video?