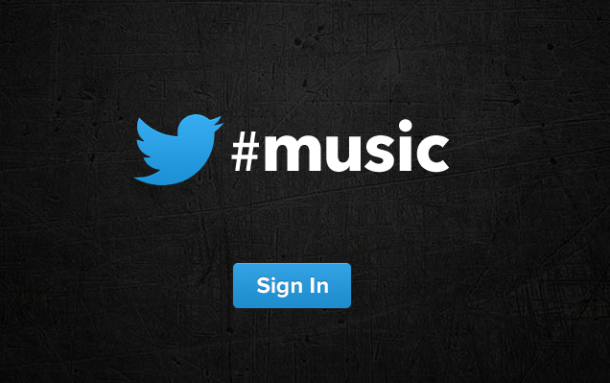 Twitter Thursday announced on, well, Twitter that it snapped up We Are Hunted, a music startup which tracks what songs people share the most across social networks.

But that’s so yesterday. Just 24 hours later, Twitter on Friday announced its music service is crawling out of obscurity, having changed from “invite only” to “coming soon.” Not much is known about the service as of yet except for a tidbit here and there.

According to some well-informed people, the micro-blogging service will be launching an app for iOS devices as well, timed to the start of the Coachella music festival this weekend. Matter of fact, if you’re Ryan Seacrest, a filmstar, an influencer or some such celebrity, you could start using Twitter Music today…

What’s it all about?

A lucky few can use their Twitter credentials to log in to the Twitter Music on the web, but there are no features as of yet.

According to Peter Kafka of AllThingsD, features include artist and song suggestions based on a number of personalized criteria, including what your followers have shared. Additionally, Universal Music and Sony-owned Vevo will be providing music videos.

lovin the app…shows what artists are trending, also has up and coming artists… spinning u now @frankturner — Ryan Seacrest (@RyanSeacrest) April 11, 2013

Users will be able to listen to clips of music from inside the app, using third-party services like iTunes and SoundCloud; they will also be able to watch music videos provided by Vevo, the music video service owned by Universal Music and Sony.

The software is said to source snippets of music from third-party services, including Apple’s iTunes and SoundCloud. For what it’s worth, the We Are Hunted web site confirms that “we will continue to create services that will delight you, as part of the Twitter team,” adding that “There’s no question that Twitter and music go well together. Artists turn to Twitter first to connect with fans, and people share and discover new songs and albums every day.”

We Are Hunted’s Stephen Philips tweeted out a sample snippet playable through Twitter itself, thanks to Rdio integration. This gives hope that the micro-blogging service will be upgraded to allow anyone to post songs in this manner, possibly using other sources of music such as Vevo, iTunes, Spotify, SoundCloud and more.

So far, Twitter Music sounds intriguing enough, too bad I’m not famous enough to have a crack at it.

Non-famous people will have to wait about a week to get their hands on the software.